The Real Housewives of Sustainable Fashion

The Real Housewives of Sustainable Fashion 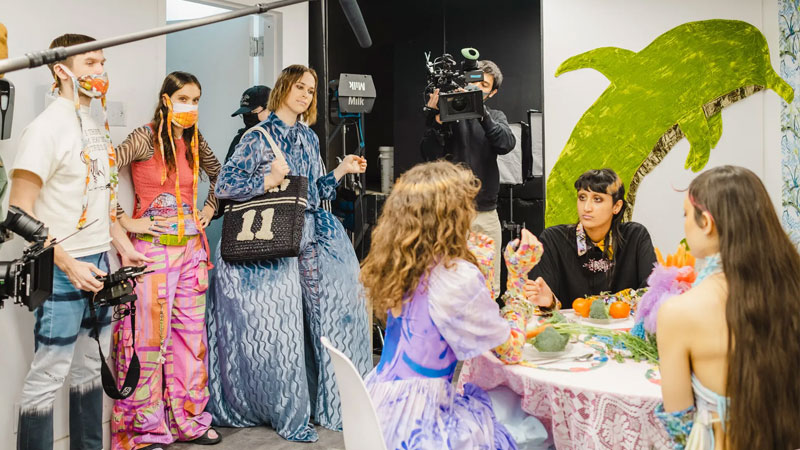 Charlie Engman, left, with Hillary Taymour, center left, directs a scene for “The Collinas,” a parody of “The Hills” starring Tommy Dorfman, center, released in lieu of a runway show.Credit...Lanna Apisukh for The New York Times

The eye doesn’t always know where to settle.

On the purple-and-orange wicker purse in the shape of a frog? On the rhinestone horns stuck to the tops of lime-green sneakers? On the protruding, heart-shaped hips of a pink velvet gown, formed by old-fashioned side hoops?

Visiting the set of a Collina Strada shoot is not unlike being greeted by a delegation from another planet. The models, in their layers of mismatched candy-colored clothing, are a new species, bred from goth mall rats and granola girls. They don’t strut and pose. They frolic and stomp.

On this Monday in February, they have been plucked from their grungy fantasyland and dropped into a rented film studio in South Brooklyn. Here, the brand is working on a project bridging our world and theirs: a parody of the mid-2000s reality show “The Hills” (Collina translates to “hill” in Italian) with some “Real Housewives” energy.

“The Collinas,” which debuted a week later, on Feb. 16 at New York Fashion Week, is not the company’s first fashion film. In September 2020, when the pandemic forced labels to swap their runway shows for online presentations, it released a video titled “Change Is Cute.”

At the time, the digitization of fashion shows wasn’t ideal for many designers, who may depend on traditional in-person formats to reach buyers, editors and influencers. Collina Strada, however, saw an opportunity to fully express the world it envisioned for its clothes — something only really possible in digital form.

“Change Is Cute” opens on a white bull (dyed purple and covered in orange squiggles) and cow (painted in rainbow florals) roaming a hilly landscape (except the hills are covered in hand-drawn fruit wallpaper). It only gets weirder from there.

This season, Collina Strada decided to continue its world-building through video. (After “Change Is Cute” came “Collina Land,” a video game funded by Gucci as part of its platform for emerging designers, and “Collina-mals,” a project that enlisted David Mattingly, the artist behind the science fantasy series “Animorphs.”) The difference this time is that the film is scripted.

Hillary Taymour, the 34-year-old founder and creative director of Collina Strada, said she wanted to make a “pure fashion comedy.”

Ms. Taymour didn’t keep up with “The Hills” when it aired on MTV from 2006 to 2010. She was around “The Hills,” though, living in Los Angeles and going to the same clubs as its stars, who were also around the same age. Ms. Taymour dressed somewhat similarly, too, though more “indie sleaze party girl,” she said: tube tops, heavy eyeliner, American Apparel jeans and Marc by Marc Jacobs heels.

While she founded Collina Strada in 2009, the brand’s visual identity (upcycling and tie-dyeing; using natural materials like “sylk” made from the waste of rose bushes; casting models who are not willowy white women but nonbinary people, disabled people, sexagenarians) didn’t crystallize until about 2019, she said. That was the year she was named a finalist for the CFDA/Vogue Fashion Fund, a prestigious award for emerging American designers.

Just as the first episode of “The Hills” revolves around its star, Lauren Conrad, embarking on a fashion internship, “The Collinas” tells the story of a new intern starting at Collina Strada.