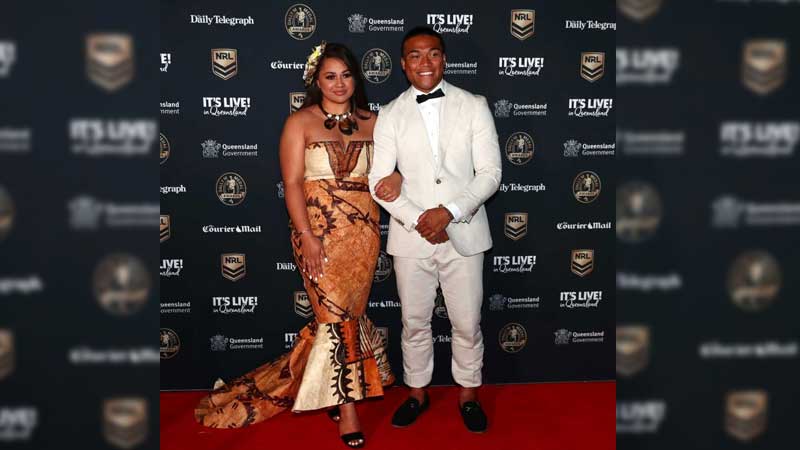 Brisbane fashion designer Vaeluaga Luse Iuli got the call to make the dress on Thursday and by Monday night it was on the red carpet of NRL's Dally M awards.

The client was Sala Moesha Crichton-Ropati, partner of Penrith winger Brian To'o, and she wanted a dress that celebrates her Samoan heritage.

Luse Luli adds that Crichton-Ropati wanted a tapa dress but didn’t know what the tapa dress would look like.

Measurements were taken and the designing began - a corset top and a high skirt with a mermaid effect at the bottom.

However, for the dress to go ahead, Sala had to provide the material - the tapa cloth.

Brisbane fashion designer didn’t have tapa fabric with her at the time and knew how difficult it would be to get hold of tapa cloth as it was never sold in fabric shops.

For a designer, the tapa cloth presented an extra challenge to make sure that Sala would still be able to sit down and move in the dress.

"Otherwise if she makes one wrong move it could tear like paper - it's a sensitive fabric - but it can be practical if constructed well". When the dress hit the Dally M red carpet the Luse Exclusive Styles designer was overwhelmed by the reaction it received.

Vaeluaga Luse Luli says that the dress is symbolic of the Samoan culture and how she wanted to make their culture part of her and her boyfriend's special night.