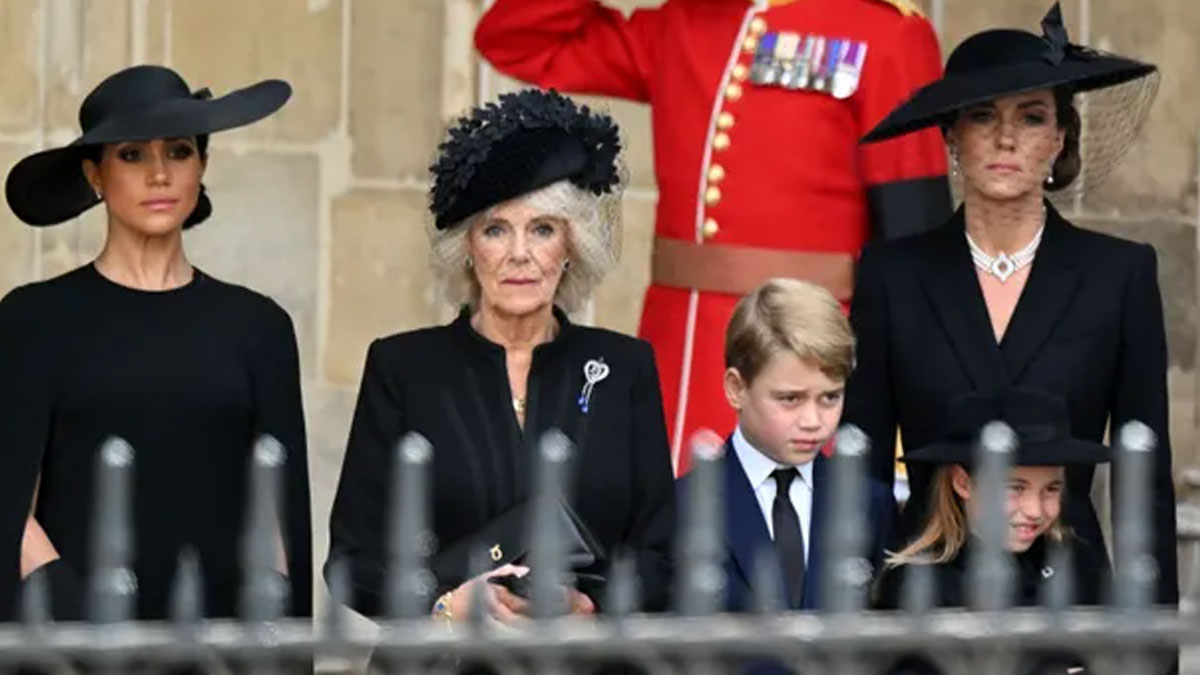 The Queen Consort with, left, the Duchess of Sussex and, right, Prince George, the Princess of Wales and Princess Charlotte. Photograph: Tim Rooke/REX/Shutterstock

Not one speck of lint on a jacket was to be seen.

For the grandest, most gorgeous of occasions the dress code was resplendent solemnity, in pearls and pillbox hats, high heels and sharp tailoring.

For the royal family this was, as the archbishop of Canterbury noted, a portrait of grief under the brightest spotlight.

The Queen Consort, the Princess of Wales and the Duchess of Sussex found a little privacy under wide-brimmed hats, or veils, or both. And while Britain was looking at the royal family, the rest of the world was looking at Britain.

The frilled white collars of the clergy and the rich scarlet and gold military uniforms contrasted with the simplicity of the black-clad mourners, a reminder that the death of the Queen has put not just the current Windsors but the whole notion of Britishness under the spotlight.

It has been a busy 10 days for milliner Stephen Jones, who following the death of the Queen turned his central London store over to selling black hats only in anticipation of funeral orders.

“Everyone wanted to be appropriately dressed, not fashionably dressed,” said Jones. “Hats were a symbol of Queen Elizabeth’s reign, because she herself always wore them.” The most popular styles have been discreet black hats, in neutral textures.

The arcane rules which decreed that as a non-working royal Prince Harry could not wear military uniform, despite having seen more active service than most of the family, are the kind of thing that makes the monarchy look petty and nonsensical in the eyes of its critics.

But Harry defused the tension, issuing an advance statement that he would be in a regular suit, and on the day it was Princess Anne, trim in her smart white hat and starched gloves, who looked the most dapper in military regalia.

At Britain’s last state funeral, that of Winston Churchill in 1965, mourners came in top hats and mink coats, while Lady Churchill was dramatically submerged beneath yards of black lace.

Modernity has done for the full-length veil, with a “birdcage” length which covers the top half of the face preferred this time by Kate and Camilla. Other modern touches included Carrie Johnson’s nod to sustainability in a rented Karen Millen coat dress.

Kate and Meghan were dressed in almost mirror-image harmony, a quiet riposte – or at least, no comment – to salacious interest in the fissure between the Sussexes and the new Waleses.

Both women wore saucer shaped hats – Kate’s softened with a small veil, Meghan’s with a wave in the brim.

Only Kate’s showstopper four-row pearl choker and matching bracelet from the late Queen’s collection, which rather overshadowed Meghan’s simple pearl drop earrings, hinted at the discrepancy between their positions.

Outside the circle of close mourners there were touches of individual glamour.

Jacinda Ardern wore a kākahu, a traditional Māori cloak made from feathers, which is a symbol of ritual and prestige in New Zealand.