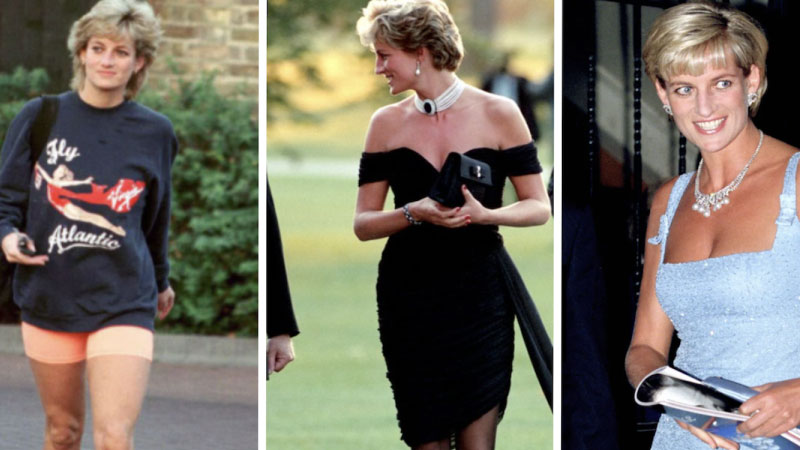 Princess Diana was beloved for her impressive activism and globally adored personality, as well as her unique fashion sense. Many modern trends reflect her style, reinstating the fact that Princess Diana is, in fact, a timeless inspiration to many.

The first iconic outfit that has been sensationalized all over the internet is her neon biker shorts paired with a loose long-sleeved shirt. The Kardashians have since brought back the comfortable biker shorts look, but Princess Diana was one of the original influencers.

Princess Diana’s “Revenge Dress” made headlines in 1994 when she wore it to an outing on the same night it was revealed that Prince Charles had cheated on her. The off-the-shoulder gown was made entirely of silk and paired with a large sapphire necklace. The dress was iconic not only for that night but also was sold to a Scottish couple who planned to use the money for charity.

In 1997, Princess Diana attended a performance of “Swan Lake” and wore a sky blue dress decorated all around with sparkly sequins. She paired it with a metallic purse and a dangly pearl necklace.

Brands worldwide were honored to have Princess Diana wear their clothing items. This purple dress created by Versace, and corresponding shoes by Jimmy Choo, were spotted on the princess in Chicago in 1996. Many fans of Princess Diana also comment on how the royal was never afraid to wear bright colors that some may consider risky.

Another colorful look sported by the princess was the red blazer jacket and purple skirt worn in 1992. She was seen visiting the Taj Mahal in this outfit along with a pair of black sunglasses.

Many people consider Princess Diana to be the royal with the boldest style in fashion history. Worn to a rock concert, the princess sported a rainbow-striped dress and a velvet blazer. The dress was a statement piece not only because of its color but also the metallicness from top to bottom.

One of many things that the public admires about Princess Diana was her ability to maintain her own unique style apart from her royal duties. She was a truly iconic woman who changed the world and inspired people to be original and kind. Princess Diana’s legacy lives on, as everything about her is remembered in today’s society–especially her style.

The man alleged to have murdered a 35-year-old farmer during an argument out at sea between Laucala Island and Taveuni last week has been ... 7 minutes ago

A relative of the man whose body was found under the Vatuwaqa Bridge earlier this week has come forward. Police say the victim has been identified ... 7 minutes ago