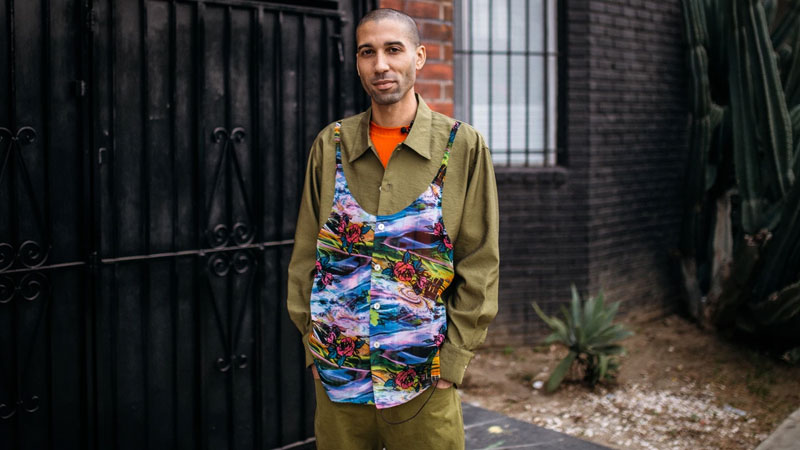 At the intersection of genderless fashion and sustainability, you’ll find designer James Flemons. He’s been designing clothes for some of the biggest names in Hollywood, like Billie Eilish, Lizzo and Solange.

Arguably one of his most recognizable styles is his red, Western-inspired outfit for Lil Nas X worn on the cover of Time magazine in 2019, which Flemons described as taking recognition of his work "to another level."

But that all came years after he was simply working as a store associate at Opening Ceremony, a since-closed fashion hub for trendsetters and celebrities.

“In these retail spaces, you never know who’s gonna come in. As early as my teenage years, there were celebrities and people in fashion, who I would end up talking to or helping or ringing up unexpectedly,” Flemons said. “My time in retail really helped evolve my presence and was the gateway for me to enter into the fashion industry."

The Fashion Institute of Design and Merchandising graduate started his own brand, Phlemuns, in 2013, but his big break came after he was unexpectedly laid off from Opening Ceremony in 2015. “At first, it was a little jarring for me. And then I was like, wait, I get unemployment. I get to do whatever I want,” Flemons recalled. “It was the first time I could really fully immerse myself in creativity. And after that I put out my spring/summer 2016 collection, and that was a collection that really kind of got a lot of eyes on me.”

Ironically, that collection got picked up by the very store that had laid him off. It also kick-started his working relationship with Solange Knowles, someone he first met while working at Opening Ceremony.

“I would say the biggest, kind of most pivotal time in my career was my kind of creative relationship with Solange. And that was like, really, at the top of my visibility,” Flemons said. “I did a custom for ‘A Seat at the Table’ for ‘Don’t Touch My Hair.’”

But after some of these early big wins, Flemons said he noticed attention toward his brand stalled. But with the racial reckoning that followed George Floyd's murder in May 2020 came a scramble to recognize and promote Black-owned businesses and brands.

“I mean, I don’t know how many DMs I got of white women all of a sudden adding my brand, like, ‘pay attention to this Black…’ — all the lists I was on!”

Flemons said that attention felt like a double-edged sword.

“At first it was really nice and then it got to feel a little crazy and a little performative," he said, "but it did introduce me to a lot more audiences and it expanded my business.”

Phlemuns, which puts an emphasis on clothes that don't conform to traditional gender rules, follows a general shift in the ways people identify their gender and sexual orientation. A recent Gallup poll found that 7.1 percent of U.S. adults are LGBTQ, which is twice as many adults in that group a decade ago. Boosting that figure is the large share — 21.5 percent — of 18- to 25-year-olds who are LGBTQ.

“It was really important for me to make like a safe space of just like genderless or nonbinary clothing that very much just speaks to your identity and gives room for anyone to feel comfortable, to explore that — whether gay, straight, nonbinary, Black, white, brown, whatever,” Flemons said. “You can find something that fits into this world that you can express yourself in.”

Flemons said part of creating that space was making sure people could afford his designs. “I wanted to create a brand that could still sit with these higher-end, mid-range to high-end luxury brands. But it was accessible to people who come from my background and identity and have been there to support me.”

Despite all the success, Flemons said he wouldn’t even be a designer if it wasn’t for the trailblazers who came before him.

Following the death of fashion icons André Leon Talley and Virgil Abloh, Felmons felt a strong responsibility to continue their legacy within the fashion world, pushing the boundaries of what is possible.

“America has a very rigid, kind of ... idea of what a Black man is supposed to be or what they’re supposed to do. And I think both of them really kind of broke that mold,” Flemons said. “There’s a lot more that comes in this package of a Black male or Black designer, and I wanted to be there to show that the world is limitless.”