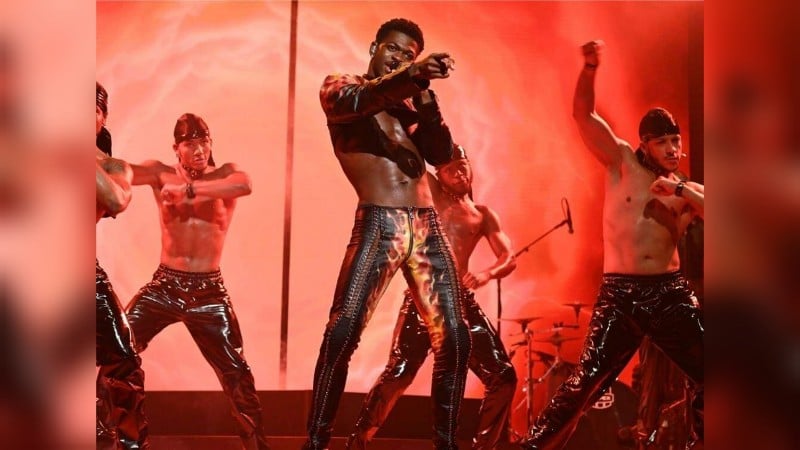 Lil Nas X had a wardrobe malfunction during his first-ever performance on Saturday Night Live. Watch the embarrassing moment and his candid reaction.

Lil Nas X found himself in a tight spot during his Saturday Night Live performance debut on the NBC show's season 46 finale, which was hosted by The Queen's Gambit actress Anya Taylor-Joy.

Just after beginning a pole dance while performing his popular single "MONTERO: Call Me by Your Name," the pop singer looked down to discover his leather pants had ripped in front.

Lil Nas X smiled sheepishly as he continued singing and danced in place while covering his crotch with his hand. He later laughed off the wardrobe malfunction.

"NOT MY PANTS RIPPED ON LIVE ON TV," the 22-year-old singer tweeted later that night, adding. "OMG NO."

On Sunday, May 23, Lil Nas X wrote, "I know A do a lot of planned s--t but ripping my pants on live television is not one of them."

He later added, "At first i was afraid to even perform. Then we rehearsed for 2 weeks, then all of the dancers got removed because one had COVID-19 and new ones had to learn the routine in 24 hours, and then I ended up ripping my pants and couldn't finish. Everything happens for a reason though lol."

The "Old Town Road" artist also shared a clip of the wardrobe malfunction on TikTok, along with a video showing him wincing while watching it.

"Thank u SNL for my favorite night of my career!! I love u!" he tweeted, to which a user replied, "Even though your pants ripped?" Lil Nas X responded, "That's life."