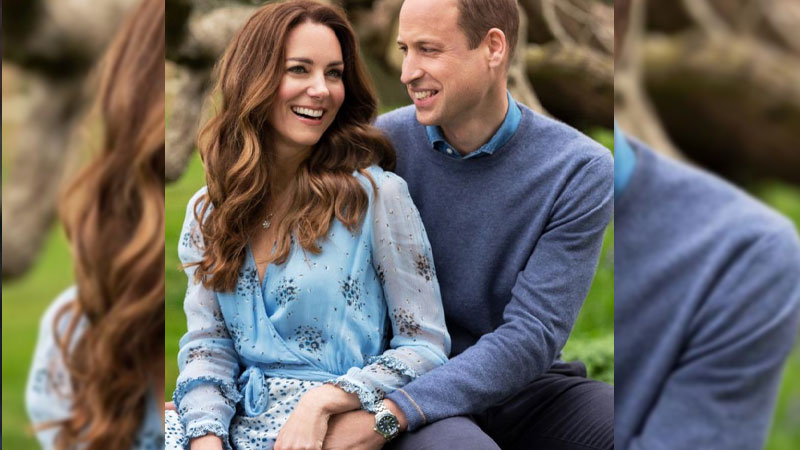 A decade has passed since a young Kate Middleton walked down the aisle in her now-iconic Alexander McQueen bridal gown, walking past the pews at Westminster Abbey to wed her husband, Prince William.

Now, the Duke and Duchess of Cambridge are celebrating their tenth wedding anniversary—set to take place tomorrow on April 29 (April 30 in Australia)—and, to mark the momentous occasion, the royal couple have partnered up with British photographer Chris Floyd to release two, all-new portraits.

Taken at their residence in Kensington Palace, the two intimate portraits show a joyful Kate and William clad in blue.

In the first, the Duke and Duchess hold hands in what appears to be their garden at Kensington, while in the second, they share an embrace.

The Duke and Duchess’ outfits—both in matching hues—serve as a wonderful reminder of their synergy, a relationship that has only grown stronger over their years of public service, and raising a family of three young children, Prince George, Princess Charlotte, and Prince Louis.

Just recently, the Duchess paid a visit to a farm in Durham with the Duke, where she played golf—and even drove a tractor.

While it is still not yet clear as to how William and Kate will be spending their tenth anniversary, we do know that their children have attending school in-person with the lifting of Covid-19 restrictions in the UK.

In fact, little Prince Louis, the youngest of the Cambridges, recently celebrated his third birthday and his first day at pre-school with a portrait of his own.

While the dress has since been sold out, you can shop similar versions of the beautiful piece below.