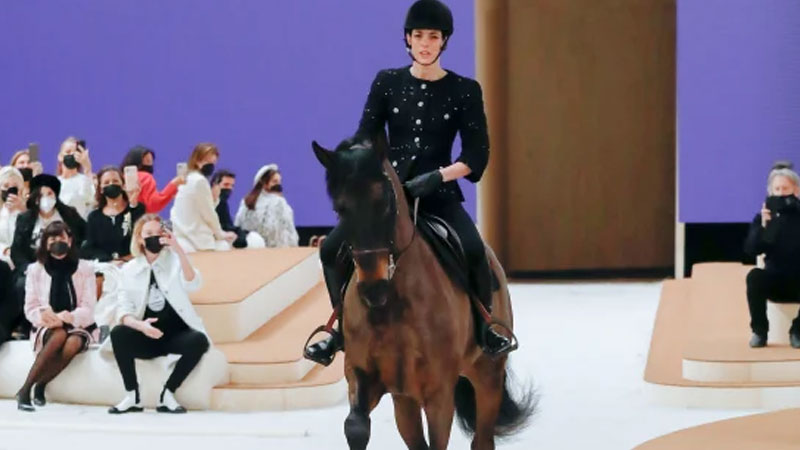 Charlotte Casiraghi, the granddaughter of Grace Kelly, just rode a horse down the runway to open the Chanel spring/summer 2022 show at Paris Fashion Week.

The model, writer and equestrian, 35, sported a cropped, glittery jacket and a black riding hat as she calmly put her noble steed through its paces.

People on the sidelines eagerly filmed Casiraghi and her equine companion, who is an 8-year-old Spanish bay horse named Kuskus, according to Vogue.

Casiraghi is an accomplished equestrian as well as an official ambassador for Chanel. She has competed in show-jumping competitions for years and is a patron of the Longines Global Champions Tour.

Despite her experience, though, Casiraghi said she was nervous about opening the Chanel show on horseback.

“I rode a lot at one time, but in the past three or four years, very little,” she said in a video on Chanel’s Instagram page. “So I was a bit scared of not being able to do what (artist) Xavier (Veilhan) wanted.”

But Casiraghi and her four-legged companion pulled off their appearance without a hitch, walking smoothly around the runway before breaking into a gentle trot near the end.

Kuskus also looked like a natural, posing for a candid pic on set with the show’s creators.

Asked about the choice to open the show with a horse, French set designer Xavier Veilhan said in an Instagram video that it was “a way of aligning the very strong aesthetics of the horse with those of haute couture and seeing how refinement and animality can combine.”

Casiraghi also noted that Gabrielle “Coco” Chanel, who created the brand, had an affinity for horses and equestrian fashion.

Casiraghi is the granddaughter of Rainier III, Prince of Monaco, and Grace Kelly, Princess of Monaco.