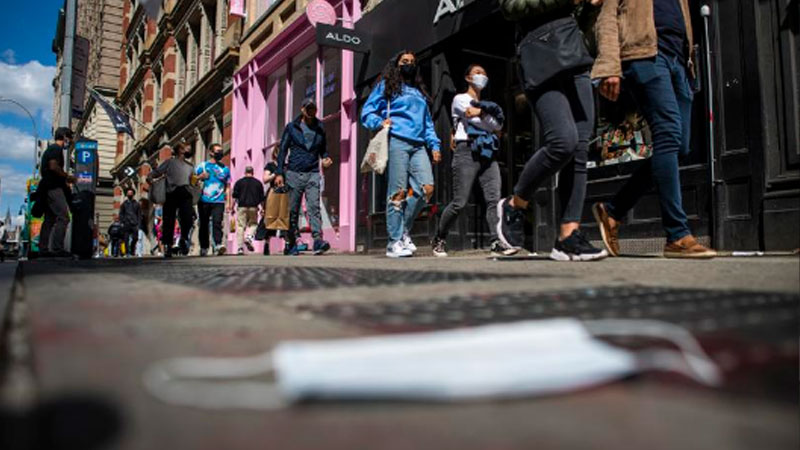 Shoppers in New York walk by a discarded face mask on May 12, 2021. Retail sales were flat last month after a buoyant March, the Commerce Department said on Friday,May 14, 2021, as Americans continued spending their latest round of government stimulus che

Retail sales were flat last month after a buoyant March, the Commerce Department said Friday, as Americans continued spending their latest round of government stimulus checks.

The pace for April was a slowdown from the prior month, when retail sales rose by 10.7%, as vaccinations increased and people became more comfortable outside their homes, spending more money on clothing, restaurants, bars and sporting goods. Retail sales, which experienced record drops just over a year ago at the onset of the pandemic, have been closely watched as monthly gauges of the health of the economy and the mindset of consumers.

The report highlights the bumpiness of the economic recovery in the United States as it emerges from the pandemic. And it shows how connected consumer spending remains to government support. Economists at Morgan Stanley had anticipated a smaller increase in retail sales in April compared with March based on stimulus check distribution, with roughly 83% of this latest round distributed in the back half of March.

“Stimulus money is driving retail sales right now,” said Robert Frick, a corporate economist at the Navy Federal Credit Union, which is able to track credit card spending across its members. “The economy hasn’t recovered completely even though we had a strong first quarter.”

Last week, a separate government report showed that job growth slowed in April, a surprise to many economists, while the jobless rate rose slightly to 6.1%. The data served as a reminder of the fitful economic recovery and that stimulus money can only go so far — eventually, it will need to be spurred by people's paychecks.

Retail sales increased in April in categories including restaurants and bars, which posted a 3% gain, as well as electronics and appliance stores and grocery stores. Declines were seen in a broad array of categories, including apparel, gas stations, sporting goods and book stores and department stores.

Still, the overall picture is sunny compared with April 2020. Spending at clothing and accessories stores was up more than 700% last month, compared with a year earlier, while furniture and home furnishing stores had gone up nearly 200% — staggering figures that were a reminder of just how devastating the pandemic was to many parts of the retail industry.

“What we need to remember is retail sales went up a crazy amount in March because of the stimulus, and it’s kind of like they’re stuck up there, so that’s good,” Frick said. “That means people have continued spending at that high rate.”

The pandemic substantially reshaped consumer behavior. Grocery store spending surged during the pandemic while restaurant revenue dropped. Apparel sales plunged as Americans canceled events, and spending on outdoor activities and home improvements soared. As vaccinations have picked up — more than 58% of adults have received at least one shot — and warmer weather has taken hold, the retail industry has been waiting to see if spending will revert to its prepandemic levels.

L.L. Bean, one of the fortunate U.S. retailers that saw its revenue increase last year as people flocked to buy cozy clothing, outdoor gear and furniture, reported significant jumps in monthly sales this year compared with 2019 and improvements in foot traffic at its stores. But the retailer has also been nervous about how it might fare in the back half of the year, including during the holidays.

“Right now, there’s a lot of stimulus money in the marketplace, there’s a lot of disposable income, there’s a lot of places for it,” said Stephen Smith, the chief executive of L.L. Bean. “We’re seeing travel start to pick up and people starting to go back to dinner and build in some entertainment. But in general, money is still flowing into retail.” As more Americans receive vaccinations, he said, that money may start flowing to “destination travel,” airlines and other events.

Broadly, many retailers, including L.L. Bean, are feeling optimistic about Americans’ proclivity for spending, as the vaccinations make them feel comfortable returning to stores and postponed events reappear on calendars.

Etsy recently said sales related to weddings soared more than 40% in the first quarter, while the clothing retailer Revolve said it was seeing strength in “event dresses” thanks to pent-up demand for special occasions including weddings and graduation celebrations. Viral memes on social media have reflected the ebullience that some younger people are feeling about the summer thanks to vaccinations, with merchandise declaring the onset of “Shot Girl Summer” or that they are “Vaxxed &amp; Waxed.”

Smith said that L.L. Bean, which saw increased demand last year for items like slippers, has been seeing renewed interest in denim, oxford shirts and other apparel meant to be worn in public.

“People seem to be cleaning themselves up a little bit,” he said. “Things with buttons and zippers are starting to sell faster than things with elastics and drawstrings.”