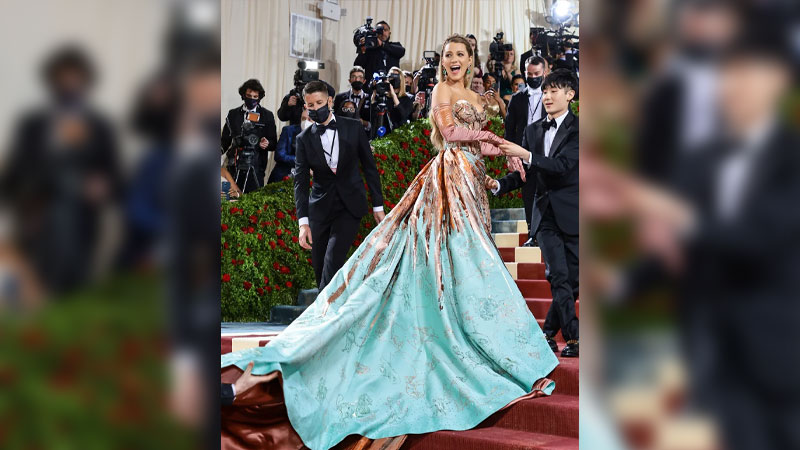 Blake Lively made an entrance at the Met Gala with her dramatic dress transformation. [Image by: JAMIE MCCARTHYGETTY IMAGES]

Blake Lively knows how to make an entrance. It's not easy to stand out from the crowd at the annual Met Gala.

The star caught everyone's attention at the Met Gala thanks to a dramatic dress transformation on the red carpet.

For this year's official theme, 'In America: An Anthology of Fashion', and the dress code of 'Gilded Glamour', Lively - who was one of the evening's hosts - opted to work with one of her go-to red carpet brands, Atelier Versace, in a design inspired by New York City.

Blake Lively walked up the iconic Met museum steps in a shimmering rose gold gown with an extravagant bow, this was inspired by Manhattan's intricate architecture and paid homage to the Empire State Building.

The bow on the skirt was then untied to reveal a cascading blue train, the design of which was inspired by the constellation decor at Grand Central station. She also peeled off her rose-hued gloves to reveal a matching blue pair underneath. Meanwhile, her seven-tier crown symbolised the Statue of Liberty, which has seven rays.

"Instead of looking to fashion to influence the dress, I looked to New York City architecture and the classic buildings," Lively explained to People on the carpet.

Of course, the actress isn't the first to have a theatrical 'transformation' moment on the Met Gala red carpet; who could forget Lady Gaga's memorable strip tease in 2019, or Zendaya's fairy-tale light-up Cinderella dress?

Lively has attended the Met Gala since 2008 and rarely disappoints, with most years finding herself on many a best-dressed list. This year was no different.