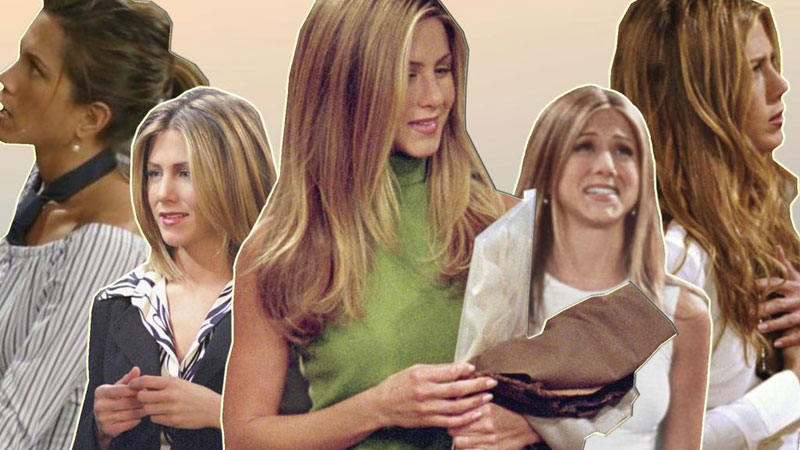 When it comes to fashionable fictional figures we’ve always wanted to emulate, chances are that a random sampling of those reading now would return the name Rachel Green—and we definitely get why.

An omnipresence over the past few decades, even those who hadn’t caught the first airing of Friends between 1994 and 2004, have caught re-runs each time they click on the TV or have binge-watched the entire series courtesy of a streaming service giving her sartorial influence new reach.

We got our first taste of Rachel’s swayback in the late ’90s, when Aniston’s heavily-layered, chunky-streaked hairstyle, created at the hands of Chris McMillan, not only earned its very own name—‘The Rachel’—but birthed its very own hair trend.

(Despite the actor herself dubbing the cut “the ugliest haircut [she’s] ever seen.”) Fast-forward to today, and Rachel is still pedestalled as a style muse, this time for her quintessentially ’90s style, which we think we could all agree is having its second coming today.

In fact, you have Rachel Green to thank for the birth of countless trends we’ve subscribed to even today, from mini kilts and athleisure, to the infallible blue jean-white t-shirt pairing, each and every one of these being hallmarks of the character’s aesthetic. Rachel’s pull was so strong in fact that her workwear too proved a source for envy.

Beginning with her short-term stint bussing tables at Central Perk, we really saw Rachel coming into her own in the scope of work style when she began moving up the corporate ladder, first at Bloomingdale’s, and eventually, at Ralph Lauren.

From there, the appearance of replicable office looks on screen skyrocketed in frequency.

Echoing the same clean, almost androgynous, aesthetic that was championed by the brand towards the end of the last millenium, and into the first few years of the next, Rachel’s Ralph Lauren-ready wardrobe was filled to the brim with neutral hues, unique takes on men’s suiting, crisp white shirts, and leather trenches.

Special mentions go out to her green sleeveless turtleneck and plaid pencil skirt that debuted in the era of Tag the assistant, and the décolletage-exposing shirt and tie pairing worn as a sartorial power play when Gavin threatens to take her job.

And we’re sure you could come up with countless more. To help you get dressed for the work each morning—a near-impossible task on some days—we’ve rounded up 24 of Rachel Green’s office outfits that would serve you just as well.

The man alleged to have murdered a 35-year-old farmer during an argument out at sea between Laucala Island and Taveuni last week has been ... 1 minute ago

A relative of the man whose body was found under the Vatuwaqa Bridge earlier this week has come forward. Police say the victim has been identified ... 2 minutes ago