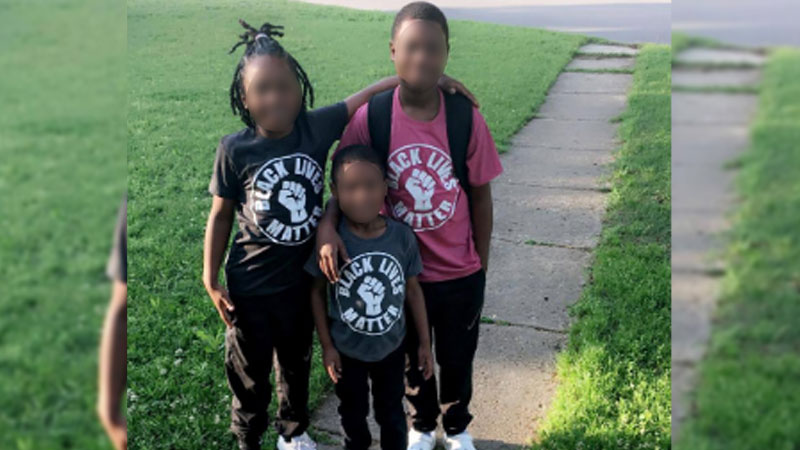 In an undated image provided by Jordan Herbert, from left, Bentlee Herbert, 8; Rodney Herbert, 5; and Jaelon Herbert, 12, wearing Black Lives Matter T-shirts. Two of the brothers were removed from their Oklahoma elementary school classrooms this past week

Two brothers, age 8 and 5, were removed from their Oklahoma elementary school classrooms this past week and made to wait out the school day in a front office for wearing T-shirts that read “Black Lives Matter,” according to the boys’ mother.

The superintendent of the Ardmore school district where the boys, Bentlee and Rodney Herbert, both of whom are Black, attend different schools had previously told their mother, Jordan Herbert, that politics would “not be allowed at school,” Herbert said Friday.

The American Civil Liberties Union of Oklahoma has called the incident a violation of the student's First Amendment rights.

On April 30, Bentlee, who is in the third grade, went to class at Charles Evans Elementary in a "Black Lives Matter" shirt, which Herbert said he had picked out to wear.

That evening, Herbert learned that the school’s principal, Denise Brunk, had told Bentlee that he was not allowed to wear the T-shirt. At Brunk’s direction, he turned the shirt inside out and finished out the school day.

On Monday, Herbert went to the school to ask the principal what dress code policy her son had violated, she said. Brunk referred her to Ardmore City Schools Superintendent Kim Holland.

“He told me when the George Floyd case blew up that politics will not be allowed at school,” Herbert said Friday, referring to Holland. “I told him, once again, a ‘Black Lives Matter’ T-shirt is not politics.”

Neither Brunk nor Holland responded to emails or phone calls seeking comment Friday.

On Tuesday, Bentlee and Rodney, who is in kindergarten, went to their schools in matching T-shirts with the words “Black Lives Matter” and an image of a clenched fist on the front.

Later that morning, Herbert received a call from Rodney’s school, Will Rogers Elementary, telling her that she needed to either bring Rodney a different shirt or let the school provide one for him, or Rodney would be forced to sit in the front office for the rest of the school day. Rodney did not change shirts, and he sat in the office until school was over.

Herbert learned later that day that Bentlee had also been made to sit in his school’s front office, where he missed recess, and did not eat lunch in the cafeteria with his classmates.