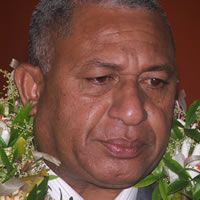 Prime Minister, Commodore Frank Bainimarama has today stressed that some Methodist Church ministers and executives should not be misleading the people by saying that the Church conference will still go ahead in August.

Bainimarama told Fijivillage News today that he is aware that some church ministers are saying during their sermons that the conference will go ahead, which is totally misleading.

He also cautions parents after reports surfaced that school children and youths from Methodist congregations were being organised for a march in August.

Bainimarama stresses that no permits will be granted for any such march and people will face the full brunt of the law if they decide to participate in any sub gathering. He said parents should ensure that the law is followed by everyone.

The Prime Minister said people should keep in mind that the Methodist Church conference will not take place in 2009.

The Youth Pastor for the Methodist Church of Fiji today confirmed that they are not organising any marches in August.

Two senior students of a prominent school are in custody following their alleged involvement in an assault case yesterday. Police say the two stude... 36 minutes ago
LATEST NEWS

Assistant DPP Elizabeth Rice has alleged in the Suva High Court that Congo National Kiala Lusaka sent the photo of his deceased wife via Facebook to ... 51 minutes ago