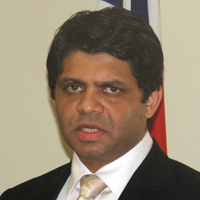 The Government has today announced that the Media Industry development Decree is now promulgated and come into effect immediately and is now ensures that all media outlets in Fiji are 90 percent locally owned.

This would have a major effect on the Fiji Times which is 100 percent foreign owned.

While making the announcement this afternoon, Attorney General and Minister for Communication Aiyaz Sayed-Khiayum revealed that the Fiji Times which is 100 percent owned by Rupert Murdoch's News Limited has been given three months from today to ensure they comply with the provisions of the decree.

Sayed Khaiyum said changes have been made to the draft following nationwide consultations.

The only change made to the ownership of media outlets under the decree is that the owners or shareholders in the media outlet must have resided in Fiji three to seven years before they become shareholders or they should have lived in Fiji at least 6 out of the 12 months in a year.

Also under the decree, the fines for journalists have been substantially reduced.

Any media outlet which breaches the provisions of the decree is liable for penalties.

There will be no criminal application to the journalist under the decree.
Latest Videos

Good news for drivers as the price of unleaded fuel will decrease to $2.62 from today. The Fijian Competition and Consumer Commission says the ... 30 minutes ago