Congressman hits out at Aust/NZ accusations

Congressman hits out at Aust/NZ accusations 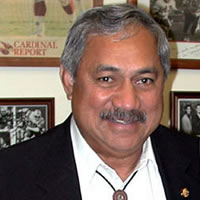 American Samoan Congressman Faleomavaega Eni Hunkin has hit out at what he terms "nasty accusations" made by the Australian and New Zealand leaders against Fiji.

While speaking at a congressional hearing in Washington, Eni Hunkin told the US Secretary of State Hillary Clinton that NZ and Australia have not understood the real situation in Fiji.

The American Samoa Congressman said the US needs to reconsider its policies in the Pacific region.

While responding, US Secretary of State Clinton said many of the 16 island nations are America's staunchest allies and some of them have voted with the US in the United Nations and its young men have gone out to war under the American flag.

She said a more comprehensive approach, an American approach is needed for the islands.