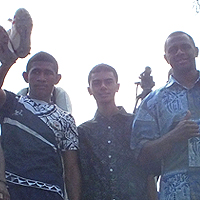 A boy scout’s dream of giving back to the Community is fulfilled as he gives out 300 pairs of rugby boots to seven secondary schools in the country.

17 year old Dayson Damuni originally from Mokani , Bau in Tailevu started a project one year ago as he aims to attain the boy Scouts of America award which is given out by the Latter Day Saints church to someone for a service project.

Dayson who now resides in Hawaii with his family said he feels good about this project.

Dayson added that the boots were collected from high schools in Hawaii after the American football season.

Today Dayson donated 40 pairs of rugby boots each to Marist Brothers High School, Nabua Secondary School, John Wesley College and Ratu Kadavulevu School while the rest of the boots will be given to Ratu Navula College and another two schools in Nadroga.