Hurricane warning in force for Yasawa and Mamanuca groups

Hurricane warning in force for Yasawa and Mamanuca groups 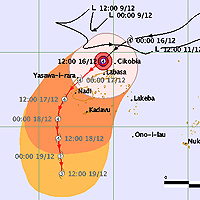 A hurricane warning remains in force for the Yasawa and Mamanuca groups.

A storm warning remains in force for the western parts of Viti Levu and nearby smaller islands and the Bua province.

A damaging heavy swell warning also remains in force for the country.

The cyclone is now moving southwest at about 22 kilometres per hour.

The centre of Tropical Cyclone Evan is projected to move over the Yasawa and Mamanuca groups around midday today according to the Nadi Weather Office.

Speaking to Fijivillage this morning, duty forecaster Terry Atalifo said when Tropical Cyclone Evan moves closer to the Yasawa and Mamanuca groups, destructive winds will begin and people need to be prepared.

The Yasawa group will be feeling the strongest effect of the cyclone from this morning but people in other parts should be prepared as Tropical Cyclone Evan is a large system.

The cyclone is expected to maintain its current intensity till Tuesday.

The Weather Office has also stressed that people need to be prepared for sea flooding.

Damaging heavy waves and swells generated by the combined effects of Cyclone Evan and an intense area of high pressure to the far south of Fiji are still expected.

The Weather Office said the resultant wave attack on our coastal communities, especially in Northern Lau, Taveuni, Vanua Levu and nearby smaller islands, as well as northern Viti Levu, Yasawa and Mamanuca, is expected to be severe.

Rain will be frequent and heavy especially along and close to the track.

Flooding including sea flooding of coastal areas is expected.

Those around northwest Viti Levu from Tavua past Lautoka to Nadi can expect winds to be destructive storm force for 4 or 5 hours later today through to the evening.

The closest approach to Nadi is expected this afternoon.

Suva and nearby towns continue to experience strengthening winds and increasing rain.

A category 4 cyclone has very destructive winds between 159 to 200 kilometers per hour and the effects from this can include significant roofing loss, structural damages and widespread power failure.