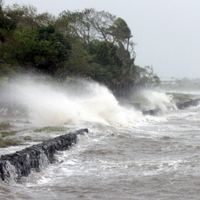 Tropical Cyclone Evan has now moved closer to Nadi and there are indications now that many areas will continue to have hurricane force, storm force or gale force winds until tomorrow morning.

Cyclone Evan which is still a category 4 system is currently located 17.5 South 177.3 East.

As highlighted earlier on Fijivillage, this will continue until tonight or even tomorrow morning.

As expected, Nadi has started getting hurricane force winds from the last hour.

This will continue until the early hours of tomorrow.

For people living in Sigatoka, please be advised that you will start getting hurricane force winds from this hour.

Storm force winds are now being experienced in Rakiraki, Tavua and Ba.

A damaging heavy swell warning remains in force for Fiji.

Sea and river flooding is expected from later today and this will be severe.

Due to the category 4 status of Cyclone Evan, the system is expected to affect many land areas.

Destructive winds may begin several hours before the cyclone centre passes overhead or nearby.

A hurricane warning remains in force for the Yasawa and Mamanuca groups, West of the line from Rakiraki to Sigatoka and nearby smaller islands.

Severe Tropical Cyclone Evan centre category 4 was located near 17.5 South 177.3 East or about 95 km south-southwest of Yasawa-i-Rara or about 30 km north-northwest of Nadi at midday and about 140 km west-northwest of Suva at 3pm today.

The cyclone is moving southwest at about 18 km/hour.

Close to its centre the cyclone is expected to have average winds up to 185 km/hour with momentary gusts to 270 km/hour.