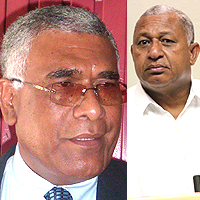 Prime Minister Commodore Voreqe Bainimarama stressed that everyone in Fiji should realize that the Great Council of Chiefs was not part of the iTaukei culture and tradition and it was set up by the British in the 1800s to try to speak to a council of a few chiefs to conduct business in the country.

Commodore Bainimarama said that some people seem to think that the GCC was already in place before the colonial times.

He said such a suggestion has been made by Ratu Naiqama Lalabalavu.

Speaking from Taveuni, Tui Cakau Ratu Naiqama Lalabalavu said according to his information, the iTaukei chiefs met and agreed to have a Council of Chiefs even before the Deed of Cession in 1874.

He said this was the beginning of the process of the chiefly body and it brought the chiefs together.

Ratu Naiqama said it is sad that the GCC has been de-established as it is easy to tear things down but hard to build it again.

When asked by Fijivillage the Prime Minister's comments on the politics in the GCC, Ratu Naiqama said the GCC was an august body to look after the interests and rights of the iTaukei.

He said the basis of this was the right to self determination and native land.

Ratu Naiqama believes that the iTaukei social structure is important as it gives the people the right to participate.

According to recorded history, the council was established in Fiji in 1876 under the governorship of Sir Arthur Gordon.

The decision was taken following consultations with chiefs who advised Sir Arthur on how best to govern the indigenous population.

It embodied the privileged relationship of trust and protection established between the indigenous Fijians and the British.

A man and his wife who sexually exploited two young girls in Nakasi two years ago, will spend 16 years and 10 months behind bars. The man and his w... 11 minutes ago
LATEST NEWS

Fiji has recorded 66 new COVID cases since Friday. 14 new cases were recorded on Friday, 36 cases on Saturday, 10 cases on Sunday and 6 new cases ... 3 minutes ago

5000 youths are expected to benefit from the Open Skills Training that will be provided by the Commonwealth of Learning in partnership with ... 5 minutes ago