Flooding in Western and Eastern Division

Flooding in Western and Eastern Division 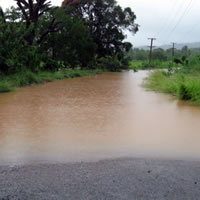 Continuous rain has led to flooding in most parts of the Western and Eastern Division.

The Department of National Roads said people are still stranded on the main highway to Rakiraki town near Vaileka as the highway is still flooded and closed to traffic.

The FSC road and crossing, the Waimari and Korotale roads are also flooded.

Tavua Police have confirmed that heavy rain continues and the Nadalai crossing, Yaladro flats and Naseyani crossing are now flooded and inaccessible.

Motorists are advised to take precautions while using the Nasiti road which is partly closed due to a landslide.

In Ba, the Toge and Namau crossings as well as Vutuni and Matani-tawa roads are all underwater.

Looking at Lautoka, the Saru back road, the Vaivai crossing and the Navula crossings are flooded including Drasa Dam and Vakabuli roads.

Works Ministry Spokesperson, Sainiana Waqainabete has confirmed that some roads and bridges in Korovou and Naqali are also under floodwaters now.

The Dawasamu road is also closed to all traffic due to flooding while Vorovoro Bridge has been washed away.

Vunidawa road in Naqali, Waima flat, Navulo-kani road, Waisa and Waivatu crossings and Wailoa roads are now under flood waters and closed to all traffic.

Members of the public are requested not to cross the flooded rivers and bridges and to adhere to the warnings given by the authorities.