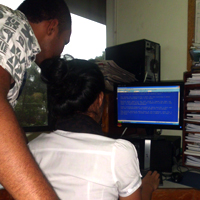 Four media organizations have so far confirmed that there is no self censorship in their newsrooms despite claims made by certain individuals in interviews and forums.

We contacted the Fiji Times today and Editor Fred Wesley said they are not self censoring.

When questioned by Fijivillage, Wesley said journalists are not afraid or reluctant as claimed by people from outside the newsroom.

Communications Fiji Limited which runs Legend FM, FM96, Viti FM, Navtarang, Radio Sargam and fijivillage.com stresses that there is no self censorship by its journalists and no one including USP’s Journalism Head Marc Edge has ever spoken to our journalists about this matter.

Edge has claimed in media interviews and forums that there is self censorship in the Fiji media.

When asked, he confirmed that he has not conducted any surveys in relation to this.

Fiji Sun Publisher Peter Lomas said there is no self censorship in Fiji Sun and anyone who reads the newspaper will know this.

Lomas said the journalists are not afraid.

He said no one from the Fiji Sun newsroom has heard from Marc Edge.

Lomas said Edge seems to be rather remote from the daily news media.

He also said Edge never spoke to one of the Sun’s Deputy Editors who was part of a panel in the recent Media Symposium at USP.

We have contacted Fiji TV Editor Geoffrey Smith and he has referred all queries to Fiji TV CEO Tarun Patel.

Fiji TV has just said that it will not comment.

Meanwhile, Permanent Secretary for Information Sharon Smith-Johns said the government is not aware of self censorship in Fiji newsrooms.

Smith-Johns said all she has said is that if there is self censorship, then it should not happen and journalists should report without any fear or favour.