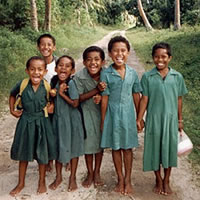 A US State Department report on "Trafficking in Persons Report" stated that Fiji boys and girls are victims of commercial sexual exploitation by Fiji citizens, foreign tourists, and sailors on foreign fishing vessels.

The report said Fiji children are informally adopted or given to other families to raise, a tradition of child placement that can facilitate trafficking in persons.

According to the report, the government of Fiji does not fully comply with the minimum standards for the elimination of trafficking and it is not making significant efforts to do so.

The report said Fiji together with Papua New Guinea are at a risk of losing some US Aid that is not humanitarian or trade related, as it has added its name in the human trafficking list.

However, the Interim Attorney General Aiyaz Sayed-Khaiyum stressed the interim government is looking into the matter and added Fiji will need support from international community to deal with the matter.