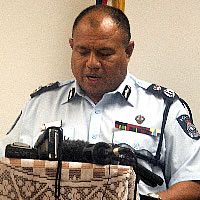 Three people have been charged in the last hour with treason, inciting mutiny and conspiracy to murder in relation to the alleged plot to assassinate interim Prime Minister Commodore Frank Bainimarama, some interim cabinet minister's and some senior military officers.

At a press conference in the last hour, Commodore Teleni revealed that the three have been charged with one count of treason, one count of inciting mutiny and five counts of conspiracy to commit murder. The three are expected to appear in court tomorrow.

Commodore Teleni also confirms that more charges are expected to be laid as investigations continue.

A number of people remain in custody in police stations around the Suva area, as police continue investigations on the alleged plan to assassinate the Interim Prime Minister, some interim ministers and some senior members of the RFMF.