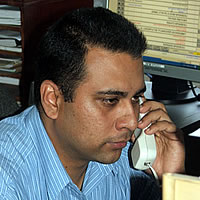 The FIT's Media and Journalism Department today reached another milestone when one of its Diploma students was allowed to host a talkback show live as part of his course work on one of the CFL stations.

Head of Media and Journalism Department, Elia Vesikula said they are trying their best to develop Journalists who are well versed with the day to day running of a newsroom before they join the media industry.

He said the achievement by Diploma student, Waisea Makutu to host a talk back show on sister station Viti FM shows that the support from the media industry is great.

The radio and television course which has been designed and written by Communication Fiji Limited's News Director Vijay Narayan in 2006 is now being used in other Pacific countries like Tonga, Samoa and Solomon Islands.

Some of the modules written by Narayan include Radio and TV Writing and Presentation, Radio and TV News Production and Direction and coursework on hosting a talkback after carrying out necessary research.