Ba and Navua come out victors

Ba and Navua come out victors 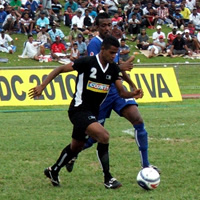 The Shop and Save Lautoka side have taken another beating after losing 1-0 yet again to Ba last night in their Champions League encounter.

Last night, Ba’s Kitione Tabeiwalu ended Lautoka’s chance of making into the final round after he slotted in the Men in Black’s only goal.

Meanwhile, in the other Champions League game played last night, Navua’s Jesoni Takala ensured that they continue with their winning streak after notching a goal to beat Rewa 1-0.

Ba now lead the points table with 8 points, Navua is second with 6 while Rewa has five and Lautoka is last with 2 points.

A man and his wife who sexually exploited two young girls in Nakasi two years ago, will spend 16 years and 10 months behind bars. The man and his w... 1 minute ago
LATEST NEWS