We are not spreading misinformation about sugar cane industry bills - Prasad

We are not spreading misinformation about sugar cane industry bills - Prasad 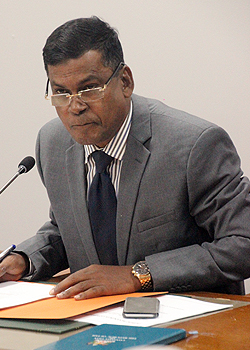 NFP Leader, Dr Biman Prasad said they are not spreading misinformation about the sugar cane industry bills as claimed by the Prime Minister.

Prasad made this comment after Prime Minister Voreqe Bainimarama said that certain opposition politicians have been spreading a lot of misinformation about what is in these bills.

Bainimarama said that these people claim the bills will take away the rights of cane farmers.

Prasad said that Bainimarama should stop accusing the opposition of politicising the issues in the sugar industry and get into the business of ensuring that they put up a package to rescue the industry.

He said the Prime Minister should let the parliamentary committee do its work as the committee is well informed on what the farmers feel about the bill.

Prasad said most of the farmers have rejected the bill and they are unhappy about the provision in the bills.

He questions what would happen if the committee comes out and says that the bill should be shelved or should not appear before the committee.

He believes that the National Federation Party and the Opposition as a whole have provided a sensible rescue package.

Some of the initiatives highlighted by Bainimarama are that registered growers will no longer have to pay a fee for having their farms registered or changing their records.

Bainimarama said that he will increase the membership of the Sugar Cane Growers Council by ensuring that each district will be represented on the Council.

He highlights that one of the requirements that they want to put in the amendment to the bill is that the Cane Growers Council must go out and consult all the growers on a regular basis.

He said the other significant aspect of the Bill that they are going to change is to remove the section on industrial disputes.

Bainimarama said as Chair of the TLTB, he has directed the TLTB and the Lands Department to ensure that for all leases that are expiring, the lessee must be told five years in advance whether the lease is to be extended or not renewed.

He also said that the Government has allocated $11‑million to the replanting effort and cyclone victims will be given first priority.

He said that upon finalization of the total hectares damaged, they estimated that about $2000 a hectare will be given to each recipient.

When asked by Fijivillage about the initiative announced by the Prime Minister which will benefit the farmers, Prasad said that those are fine but they are band-aid solutions.