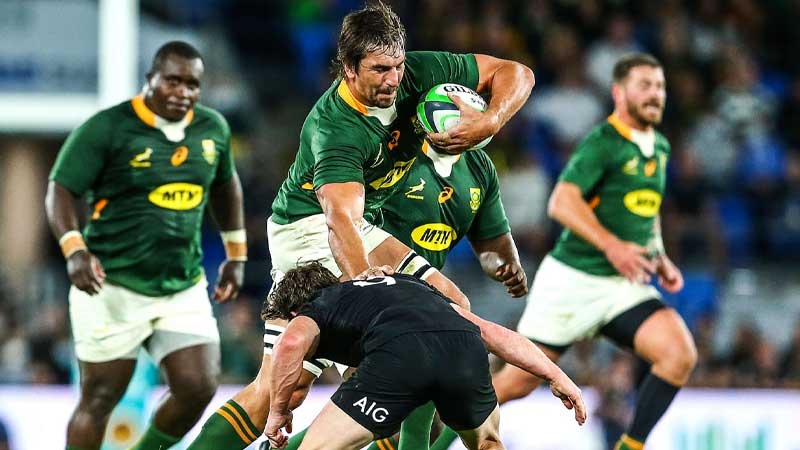 South Africa has stolen a 31-29 victory over the All Blacks in a classic test-match encounter to close out the Rugby Championship on the Gold Coast last night.

The teams traded penalty kicks and the lead, with Jordie Barrett repeating his heroics from last week with a shot to edge the All Blacks in front with two minutes to play.

Despite winning a scrum from a misguided restart, the All Blacks were unable to kill off the match, giving the Springboks one final opportunity to launch from a 22-metre lineout, which resulted in an offside penalty right in front of the posts, allowing Elton Jantjes to have the final say with time expired.

🎥 IN THE SHEDS | Join Karl Tu'inukuafe as he chats to the lads after our match against the Springboks in the Gold Coast 🤙#RSAvNZL pic.twitter.com/7kmIzlu0A7

The defeat snaps the All Blacks undefeated streak in 2021 and breaking the Springboks' three-game losing streak.

The Springboks showed much more adventure they had in their previous three matches in Australia and scored tries through Damian de Allende and Makazole Mapimpi.

Sevu Reece, Ardie Savea and Brad Weber scored tries in the first half for New Zealand but three Jordie Barrett penalties in the second half were not enough to maintain their winning run.

The All Blacks were already assured of the championship title after their victory over the Springboks last weekend.

The All Blacks will now travel to Chicago to take on USA on October 24 to begin the next stage of their mammoth tour.