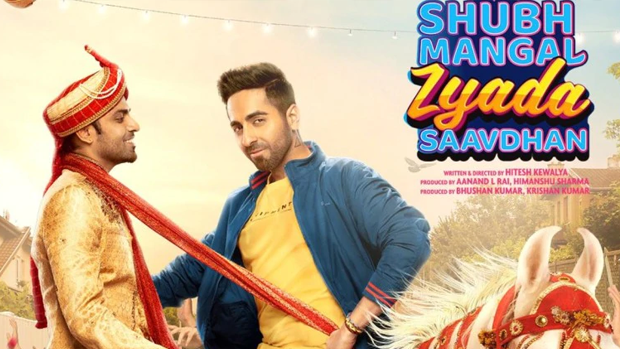 The film tries to deliver a message on homosexuality with a healthy dose of laughter.

this. freaking. scene. engrave it on my tombstone please 😭❤️ #ShubhMangalZyadaSaavdhan pic.twitter.com/N55jHIIlKc

Ayushmann can be seen kissing his on-screen boyfriend Jitendra in the trailer.

#ShubhMangalZyadaSaavdhan I never thought I would love to see the day homosexuality was represented in mainstream Bollywood openly and not with metaphors. Ayushmann Khurrana wearing a pride flag and shouting through a megaphone is all I need in life. I’ve ever been happier :’) pic.twitter.com/IS6sbjx33w

Many of the LGBTQ supporters also have taken to Twitter to drop in their comments about the quirky trailer.

Audiences are appreciating Ayushmann and Jitendra's performance in the film.

Gagraj Rao and Neena Gupta who played the role of Ayushman’s parents in the critically and commercially acclaimed film Badhai Ho, will also reprise their role in this film.

The film releases on the 21st of February.