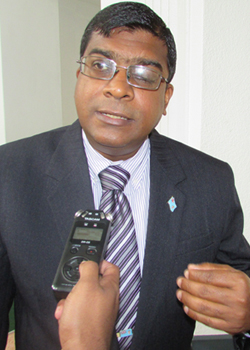 Serious concerns have been raised in relation to low pass rates for Year 13 Mathematics and three science subjects in Secondary Schools.

Chemistry is another subject where low-pass-rates have been recorded.

While addressing Secondary School Principals at the 119th Fiji Principal’s Association Workshop today, Education Minister Dr. Mahendra Reddy questioned Principals on why there has not been any improvement from 2015 and last year.

He asked them on what they have done to improve performance in these subjects and whether they have spoken to their teachers.

Reddy also asked the Principals if they have asked the teachers to provide specific strategies to improve pass rates in these subjects.

Meanwhile concerns have also been raised in relation to the performance of secondary schools in Suva and Nausori.

The Suva-based schools also recorded a very low 36% pass rate last year for the Year 12 Exam while it was 58% for the Nausori-based schools.

Schools from Ba/Tavua who went through some troubled times during and after Tropical Cyclone Winston recorded 100% rate last year for the Year 12 Exam while they achieved 86% pass rate for the Year 13 Exam.