Qereqeretabua calls out Dr. Reddy for calling her a drama queen

Qereqeretabua calls out Dr. Reddy for calling her a drama queen 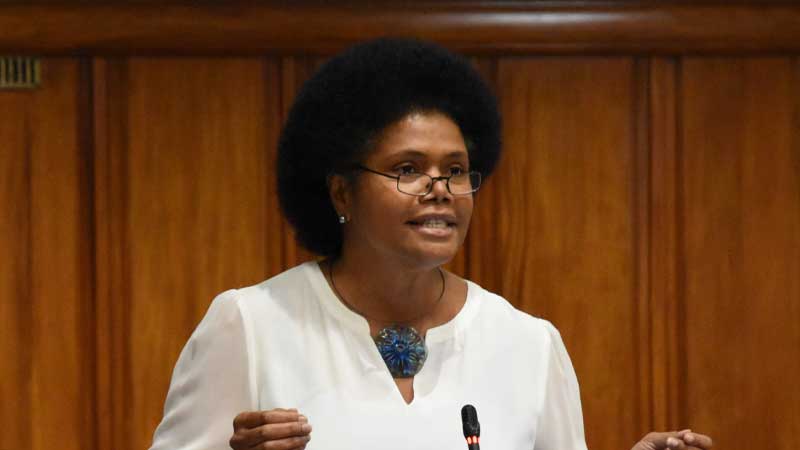 National Federation Party Vice President, Lenora Qereqeretabua says as long as the Minister for Economy, Aiyaz Sayed-Khaiyum runs this country, the politics of pettiness and personalisation will continue to be a blight on Fiji, and they will exist in a perpetual state of political antagonism, while the ordinary but hard working people continue to suffer.

Qereqeretabua says they only need to look at the shameful way that the former CEO of the Fiji Bureau of Statistics, Kemueli Naiqama and the former Solicitor General, Sharvada Sharma were treated to confirm the politics of pettiness and personalisation.

While responding to the President’s opening address, Qereqeretabua says they still do not have an idea why the Chair of the Electoral Commission suddenly resigned, and what the Prime Minister as the Chair of the Constitutional Offices Commission is going to do about it.

Qereqeretabua also stated in parliament that the FijiFirst dragged a woman, a proud daughter of Natewa, the former Minister for Women, Mereseini Rakuita through the mud, because she dared to stand up for what she believed in in relation to Bill 17.

She says this brazen politics of pettiness and personalisation should alert them to the bottom-of-the-barrel lows that the Prime Minister and what she called his boss the Minister for Economy will stoop to for their own political survival.

Qereqeretabua adds she hopes the President, Ratu Wiliame Katonivere as the holder of the highest office of the land will not lower himself to the conduct of the FijiFirst Party and go on the campaign trail for FijiFirst.

The NFP Vice President says time will tell and she hopes the President’s legacy at the end of his tenure will be one where he upheld justice and righteousness, fairness and service to everyone in equal measure.

Qereqeretabua then highlighted that communities beside the Wainadoi River depend on rainwater and the tributaries for water for bathing, washing, cooking during the dry months, because despite pre-election promises, they are still without piped water. She says what was once the best water source for all residing along this natural ecosystem has now been destroyed.

Qereqeretabua says at any one time there have been up to 3 diggers working in the creek with 7 different trucks taking loads and the banks of the creek are damaged and weakened for about 350 metres downstream.

She also says it is totally misogynistic for Environment Minister, Doctor Mahendra Reddy to call her a drama queen when she is raising the issues he should fix.

She says Fiji needs a wholesale change and for this to happen, the change must start with who is running this country and how.

Permanent Secretary for Health Dr James Fong says health workers and frontliners have done their best for two years to protect as many of us as possib... 2 minutes ago
LATEST NEWS