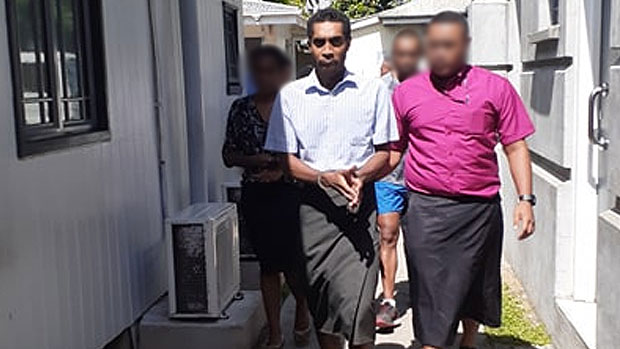 Josaia Vuetimaibose during his appearance today

The case of Josaia Vuetimaibose who allegedly murdered a two-year-old baby on the 15th of this month has been transferred to the Suva High Court.

Magistrate Deepika Prakash has ruled that it is an indictable offence and has also denied bail for the 25-year-old man.

It is alleged that the man, who is the boyfriend of the victim’s older sister, punched the child twice in the stomach.

He is charged with one count of murder.

Vuetimaibose's Legal Aid lawyer, Lorina Filipe had applied for bail on the basis that he was a first time offender.

However Police Prosecutor, Kula Nainoca objected to bail as it is an indictable offence.

Magistrate Prakash denied him bail due to the nature of the offence and the relationship between Vuetimaibose and the child's older sister.

The matter came to light after the young boy passed away at the CWM Hospital earlier this month.

A post mortem was conducted where it was discovered the child died of severe internal injuries whereby investigators at the Totogo Police Station classified the case as murder.

The child’s parents took the boy to the Valelevu Health Centre and he was transferred to the CWM Hospital where he later passed away.

The case has been adjourned to the 11th of next month.