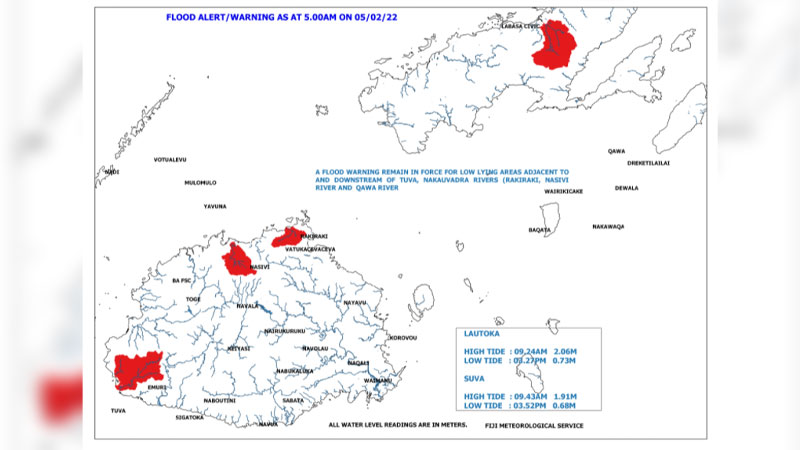 A flood warning remains in force for low lying areas adjacent to and downstream of Tuva, Nakauvadra, Nasivi and Qawa rivers.

A flash flood warning remains in force for all low lying and flash flood prone areas along Tavua to Rakiraki, Korovou and Southern Vanua Levu from Bua through, Nabouwalu, Savusavu, Korotasere up to Wainigadru, and is now also in force for low lying and flood prone areas along Vitogo Crossing Naviago and Vakabuli Paipai Crossing.

The Nadi Weather Office says a flash flood alert is also in force for all low lying and flood prone areas for the rest of Viti Levu and Vanua Levu.

A heavy rain warning remains in force for the Northern parts of Viti Levu which includes areas from Ba, Tavua, Rakiraki, Korovou and Nausori, Northern Division and Yasawa and Mamanuca Group.

A heavy rain alert remains in force for the interior of Viti Levu, Western, Southern and Eastern Viti Levu, Lomaiviti Group and Kadavu.

A trough of low pressure remains slow moving over Fiji and another trough lies slow moving to the northwest of the country and is gradually drifting towards the group.

You can expect heavy rain and thunderstorms over most parts of the country this weekend.

20 people were charged with a total of 47 counts of serious sexual offences last month. Of the 20 people charged, two were 17-year-old boys who ... 40 minutes ago