Fiji to have a new system to elect president

Fiji to have a new system to elect president 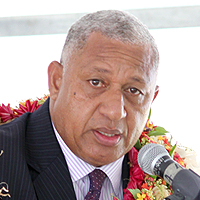 Fiji will have a new system to elect the country's president in the new constitution.

Under the 1997 Constitution, the appointing authority was the Great Council of Chiefs.

With the de-establishment of the GCC, Fijivillage questioned Prime Minister Commodore Voreqe Bainimarama how the president will be appointed.

We asked him whether this would pave the way for Fijians to elect their president.

Commodore Bainimarama said that whatever happens, the GCC will definitely not be the appointing body as it no longer exists.

All the decrees and regulations in relation to the GCC have already been revoked by the president.

A Suva businessman is currently being questioned by police for allegedly attempting to rape his staff. The man is in his 60s. The woman who is ... 28 minutes ago