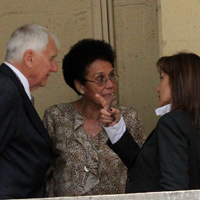 However the curfew condition will remain for the four accused.

The Acting Chief Magistrate has ruled that the four will now have to report three times in a week, on Monday, Wednesday and Friday from 8am to 4pm to the nearest Police Station instead of reporting daily.

Another variation granted today is that Samisoni can now move from her Central Apartments to Muanikau.

Ratuvili told the accused the other bail conditions remain.

The four are charged with urging political violence and are alleged to have urged one Waisea Kaloumaira to burn the city of Suva in December last year.

It is alleged that the four, between the months of September and December last year, in Suva intentionally conspired to overthrow by force of violence the Government of Fiji.

The case is adjourned to 22nd March.

A Suva businessman is currently being questioned by police for allegedly attempting to rape his staff. The man is in his 60s. The woman who is ... 14 minutes ago