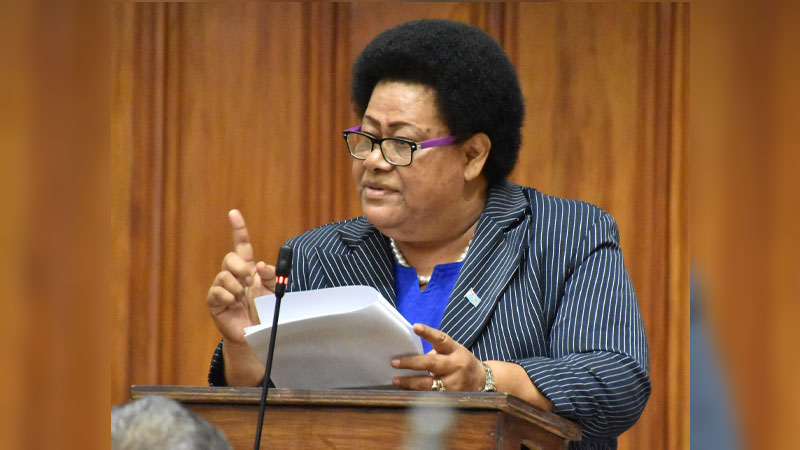 Assistant Minister for iTaukei Affairs Selai Adimaitoga has claimed in Parliament that the Opposition politicians and other politicians like People’s Alliance Party Leader Sitiveni Rabuka and Unity Fiji Leader Savenaca Narube are spreading lies through fijivillage and the Fiji Times for their political gain.

She also spoke about spreading of lies on the vaccines.

While responding to the President’s opening address, Adimaitoga says these politicians did not care that people were suffering during the COVID-19 pandemic as they could have done their part in assisting.

She says they put themselves ahead of the suffering people of the nation.

She also claimed that the Fiji Times lied about the military involvement during the COVID-19 pandemic which made democracy in Fiji fragile.

Adimaitoga says they were caught out with their lies as International IDEA (Institute for Democracy and Electoral Assistance) stated that they had not observed a concern in the military’s involvement in the pandemic response as they acted under the leadership of the Ministry of Health.

She also reminded politicians like Rabuka and Narube that it's the Minister for Economy, Aiyaz Sayed-Khaiyum who is bringing the Fijian economy back during this time of suffering.

Adimatoga claimed that Rabuka destroyed the economy through reckless spending and corruption and hopes that SODELPA will recover quickly from the snake bite.

She says with the elections coming up, more and more lies from desperate politicians will try to undermine the great work that has been done to bring the country to where it is today.

She further says election year brings out the worst in Opposition politicians as can be seen in past elections and Fijians must not fall for the misinformation that will be seen in next year’s election.

She urged all politicians to put the country before themselves.

The Minister says the fact is that the current democratic process is the best that the country has ever had.

She is reminding the Opposition that even though they complain about democracy and the 2013 Constitution, they will be contesting the 2022 general elections under the democratic process.

Meanwhile CFL stations, Legend FM, FM96, Viti FM, Navtarang and Radio Sargam and website, fijivillage have never spread lies on the vaccines. In fact, we have supported the vaccination campaign even before it started with awareness campaigns, talkbacks and special shows to assist the Health Ministry.

We are not in the business of personalizing and politicizing issues.

We always stand for balance, fairness and accuracy.

Permanent Secretary for Health Dr James Fong says health workers and frontliners have done their best for two years to protect as many of us as possib... 35 minutes ago
LATEST NEWS

The Fijian Government says in their effort to assist locals in reaching out to the Tongan victims of the recent volcanic eruption and tsunami, they ... 8 minutes ago

Actor Arnold Schwarzenegger has been involved in a car accident in Los Angeles. LA Police say a woman was hurt in the four-vehicle crash, which ... 29 minutes ago

Save the Children says they will join the response to assist families in Tonga affected by the volcanic eruption by establishing temporary learning ... 32 minutes ago