Irrfan Khan on cancer battle: If I get to live, I want to live for my wife

Irrfan Khan on cancer battle: If I get to live, I want to live for my wife 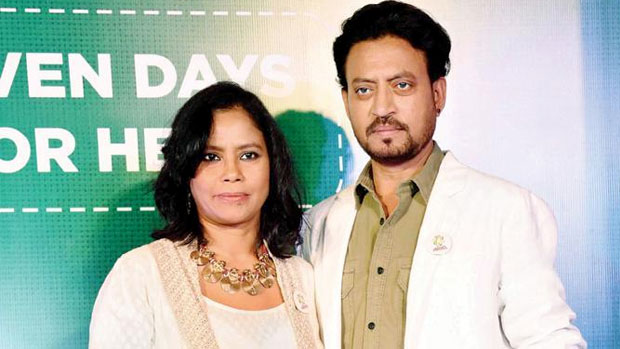 Actor Irrfan Khan who was diagnosed with neuroendocrine cancer in 2018 says if he gets to live, he would want to live for his wife.

Ever since Irrfan was diagnosed with this illness, his family, friends and industry peers have respected the privacy and refrained from talking about his health.

Irrfan says that it has been a roller-coaster ride but a memorable one.

He says happy moments were underlined because of the inherent uncertainty.

Khan says they cried a little and laughed a lot.

The actor adds that he has gone through tremendous anxiety but has somehow managed to control it.

On the work front, the actor will be making his much-awaited comeback with the sequel of his 2017-hit film Hindi Medium; titled Angrezi Medium, the story follows the heartwarming story of a girl played by Radhika Madan, who wants to study in London and how her father does everything in his power to make her dream come true. Irrfan plays Radhika's father in the film.

Khan is also known for Hollywood movies such as Life of Pi, The Amazing Spider-Man, Slumdog Millionaire, Jurassic World and Inferno.

The film will release next Friday.

Fijian Drua centre Kalaveti Ravouvou who will make his debut for the Vodafone Flying Fijians this afternoon is relishing the opportunity to play again... 47 minutes ago
LATEST NEWS

20 people were charged with a total of 47 counts of serious sexual offences last month. Of the 20 people charged, two were 17-year-old boys who ... 56 minutes ago