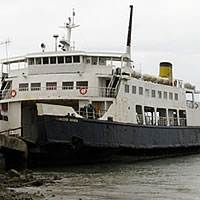 One of Fiji's iconic inter-island vessels, the MV Princess Ashika has sunk off the coast of Nuku'alofa in Tonga with 75 passengers onboard.

Radio New Zealand reports that a few minutes later, the center received a distress beacon alert from the vessel which was heading from Nuku'alofa to Ha'afeva in the Nomuka island group.

The ferry carrying 45 passengers and 30 crew was reported to have sunk about 86 kilometers from Nuku'alofa.

Early reports from the first rescuers on the scene indicate at least 40 people had been rescued from liferafts but the number of fatalities was unknown as many were still unaccounted for.

Maritime radio relays from New Zealand and Tonga were continuing to ask for assistance from any vessels in the area.

The Princess Ashika, which was once owned by local company Patterson Brothers shipping, was sold to Tonga.
Latest Videos