In Islam, everyone is equal, despite their ethnicity, language or nationality & this principle has relevance as we build a new & better Fiji – Koya

In Islam, everyone is equal, despite their ethnicity, language or nationality & this principle has relevance as we build a new & better Fiji – Koya 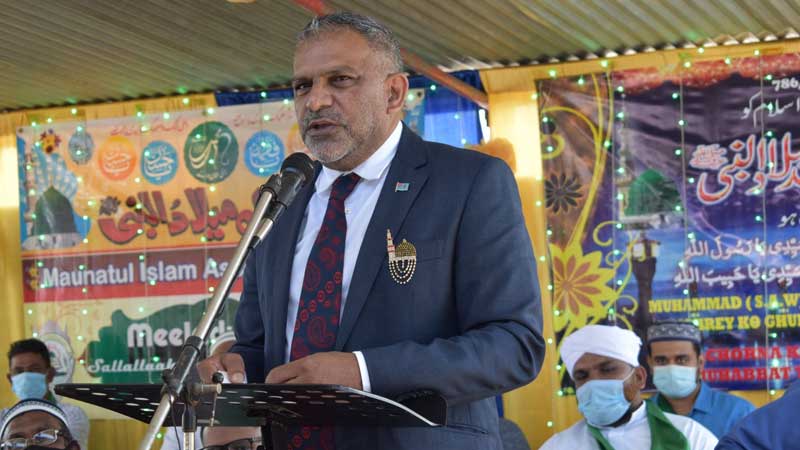 Minister for Commerce, Faiyaz Koya says in Islam, everyone is equal despite their ethnicity, language or nationality; no one has more privileges and no-one has a higher status based on birth or wealth.

While speaking during Prophet Mohammed’s Birthday celebration at the Ma'unatul Islam Association in Lautoka, Koya says this is a fundamental principle in Islam that has relevance to us all as we work to build a new and better Fiji, with common and equal citizenry and with justice and opportunity for all.

The Minister has also highlighted that it is their moral obligation, as Muslims, to extend a lending hand to those in need, particularly in times like this, where Fijians need to be united.

Koya adds while Prophet Muhammed was born into a well-known family in Mecca, he had an extremely difficult childhood where he became an orphan early in his life and was dependent on the care of his grandfather who also died when he was eight years old.

The Minister says Prophet Muhammed shares this experience with other great religious leaders who were not born to wealth or privilege.

Koya further says he knew what it was like to be poor, to struggle and while he reputedly became affluent later in life, he taught that we all share a responsibility to care for the needy and the helpless.

He says it is beyond a shadow of doubt that religion is a unifying force because a sense of spirituality and a belief in something greater than ourselves is common to the overwhelming majority of Fijians despite our diverse religious backgrounds.

Koya adds we can find common ground with each other by understanding and respecting that principle, as the teachings of all our religions are interconnected and they exemplify similar values - of consideration for others, especially the less fortunate, of honesty and integrity in the way we live our lives and of duty and service to each other, our nation and the higher being we worship. The Minister is urging everyone to celebrate Prophet Muhammad’s teachings of love, understanding, social justice and equality among all people.

Koya adds people of faith have an important role to play in society by being a voice to ensure ethics and morality exists in society, and especially for a democratic one.

The Ministry of Health says the public is advised that if indeed the COVID-19 variant, Omicron is more transmissible than Delta, then it will be inevi... 3 hours ago
LATEST NEWS

Assistant Minister for Youth and Sports, Alvick Maharaj says the parties in the Opposition can’t see what the Prime Minister is doing and he also ... 56 minutes ago