I may have to consider other options - Tabuya

I may have to consider other options - Tabuya

SODELPA Whip, Lynda Tabuya has raised serious concerns about how SODELPA is being run with no concrete plan for the 2022 general elections, the leadership flying blind and the banning of the Kadavu constituency council members from the party management board meetings for three months.

Tabuya has labelled the party’s management as incompetent and says it is sad that the Kadavu constituency council was blocked from attending SODELPA’s management board meetings based on the reasoning that the constituency has not held it’s AGM.

She says no constituency council has the power to conduct their own AGM.

Tabuya says the party’s General Secretary must be present to conduct the AGM and validate it. She says this is the issue she had in Nasinu where the executives came and invalidated her AGM as President of Nasinu four times because they had claimed the General Secretary was not present or some other issue.

She says the buck stops with the party executives.

Tabuya also says she can see the party executives trying to hold on to the majority in the management board by excluding certain constituency councils.

Tabuya says she is seeing no plan by the party leadership after coming in last November and she also has no faith in the current leadership.

The SODELPA Whip says she has to consider other options if no concrete plans are presented. 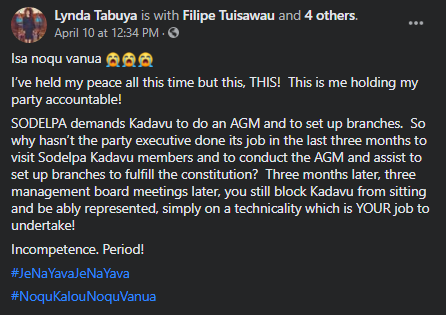