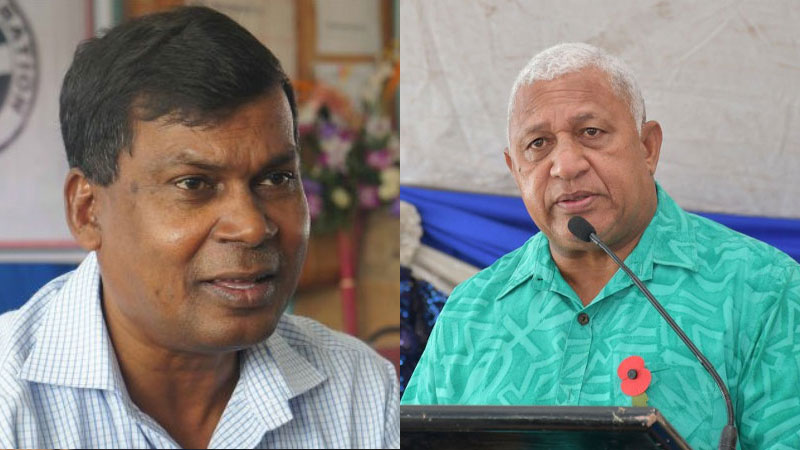 National Federation Party Leader, Professor Biman Prasad has described Prime Minister Voreqe Bainimarama and his government’s response to the plea for help from a terminated Fiji Airways flight attendant as inhumane, insensitive, unjust and a total lack of social responsibility.

Bainimarama has said that he cannot interfere with the Fiji Airways board and management decision to re-hire workers that were let go earlier this year.

A former flight attendant of Fiji Airways, Orisi Rayaqona had requested Bainimarama if he could assist the workers that were terminated in May this year in getting their jobs back with Fiji Airways as they are recruiting again.

Rayaqona who has worked for the company for the last 30 years says he is bringing the matter to the leader of the nation, with the hope of getting assistance.

The Prime Minister says unfortunately, he cannot do anything about it.

He says he never interferes with any board and any chairmanship of any board.

Bainimarama says he always leaves it to the board and the CEOs to decide what is good for the company.

However Professor Biman Prasad says Bainimarama’s comments that he could not interfere with the decision of the Fiji Airways Board and Management in terminating the workers and then advertising their jobs to recruit new flight attendants showed the government’s lack of empathy for the unemployed.

Prasad says this is a sick joke because the airline is owned by the Government of Fiji, which is responsible for its operations and actions. He says the airline comes under the responsibility of the Economy Minister whose boss is the Prime Minister.

The NFP Leader raised the question whether the Prime Minister is now saying that he cannot intervene and tell the Economy Minister to direct the Board to treat terminated workers with decency and accord them fair and just treatment.

He also raised the question on whether the government, under the doctrine of responsibility, through the Economy Minister brought to Parliament a motion to approve a $455 million government guarantee for the airline on 25th May – ironically the very day Fiji Airways summarily dismissed almost 800 workers without even honouring the Collective Agreement with their union in terms of paying them a redundancy package.

Prasad says the Prime Minister must know that the buck stops with him.

He says if any of his Ministers fail to ensure that agreements in respect of enhancing the livelihood of workers are adhered to, they should resign, just as the then Finance Minister Charles Walker did in 1983 when it came to implementing the Nicole & Hurst job evaluation exercise in the civil service.

The Prime Minister will not comment on the NFP Leader’s comments.

We are awaiting further comments from Fiji Airways.