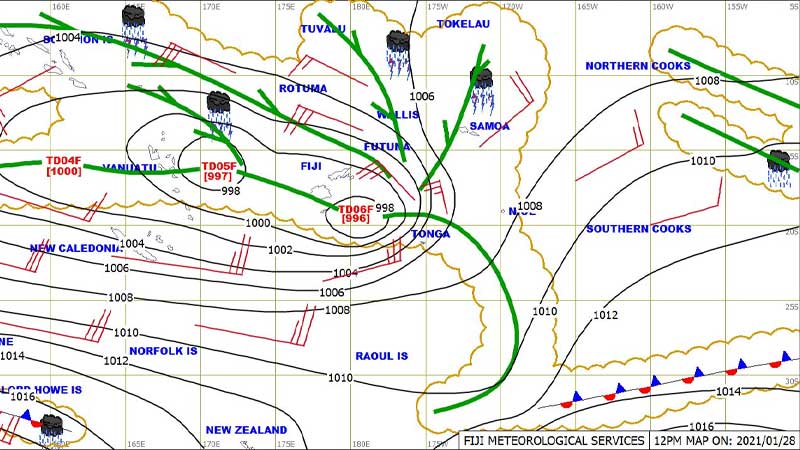 If you are living in Vanua Levu and nearby smaller islands, Yasawa and Mamanuca Group, a Tropical Cyclone Alert is now in force for your areas.

The Nadi Weather Office has also issued a Gale Warning for Vanua Levu and nearby smaller islands, Taveuni and Lau Group which means that you can get damaging winds.

There is a Strong Wind Warning for Northern Viti Levu which include areas from Lautoka, Ba to Rakiraki, and Yasawa, Mamanuca Group and Rotuma.

A Flash Flood Alert is also in place for the low lying areas in Vanua Levu and from Ba to Rakiraki in Viti Levu.

Expect heavy rain, strong winds, flooding and potential storm surges as Tropical Depression TD05F which is located East of Vanuatu is starting to become better organised and is expected to develop into a category 1 tropical cyclone within the next two days or earlier.

The Nadi Weather Office says TD05F is currently slow moving and expected to track towards Fiji in the next two days.

The tropical low that lies over Lau had upgraded to a Tropical Disturbance TD06F and further intensified to a depression.

Damaging winds associated with Tropical Depression TD06F is affecting the Lau Group. The system is currently slow moving and expected to move out of Lau waters in the next 24 hours. TD06F has a low potential to intensify into a tropical cyclone.

Meanwhile, Tropical Depression TD04F has weakened overnight and is located to the West of Vanuatu.

Damaging winds, heavy rain and thunderstorms are expected over Vanua Levu and nearby smaller islands, Taveuni and Lau Group. There is a possibility of flash flooding of low lying areas and sea flooding of coastal areas over these places.

For other areas, expect damaging winds from early Saturday morning.

Rain is expected to become frequent with thunderstorms from later today. Flash flooding of low lying areas and sea flooding of coastal areas is likely.

Extremely rough seas having a total wave height of 6 to 8 metres or more and heavy swells is anticipated. Possible storm surge with sea flooding of low lying coastal areas during high tides, with storm surge heights up to 2 to 3 metres are expected along the coast in the coming days when TD05F which is possibly a tropical cyclone by then as it tracks closer to the Fiji Group. Stay with for updates.