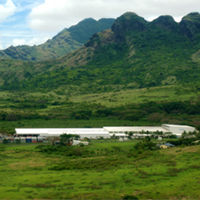 Fiji Water has today announced the closure of its factory in Fiji.

However Fiji Water said it remains willing to work through the Water Resource Tax issue with the government as it would be their preference to keep operating in the country.

As announced on Fijivillage in the last hour, Fiji Water said the increase in the Water Resource Tax announced in the 2011 National Budget is untenable and as a consequence, Fiji Water is left with no choice but to close it's facility in Fiji effective from today.

In a statement from their headquarters in Los Angeles, Fiji Water President and Chief Operating Officer John Cochran said they are saddened that they have been forced to make this business decision.

Fiji Water currently pays one third of a cent for a litre of water as Water Resource Tax.

The government announced in the budget that companies extracting more than 3.5 million litres of natural water in a month will have to pay 15 cents per litre as Water Resource Tax.

Fiji Water falls in this category.

Meanwhile Cochran has also announced that Fiji Water is putting on hold several large construction contracts in Fiji, including the renovation of Drauniivi Primary School, a $300,000 project and the resurfacing of the Naikabula Yard worth $1.6 million.

Fiji Water said it will also be forced to cancel all contracted engineering and support services as well as their purchasing of cartons from Golden Manufacturers.

It said all ongoing purchases from local suppliers will have to be cancelled.

Fiji Water said they also pay millions of dollars in duties and income tax to the government.

Prime Minister, Commodore Voreqe Bainimarama is expected to make a statement on the closure of the Fiji Water factory later today. Stay with us for that.

The 2011 National Budget supplement states that the government is expected to get a significantly higher level of revenue through the Water Resources Tax from next year.

In the 2011 National Budget announcement, the Water Resource Tax Rate will be 15 cents a litre for companies that extract more than 3.5 million litres of natural water in a month.

Based on the levels set, Natural Waters of Viti Limited which bottles Fiji Water is expected to pay the Water Resource Tax of 15 cents a litre since it extracts more than 3.5 million litres of water for production in a month.

As earlier highlighted, Fiji Water currently pays one third of a cent for every litre of water extracted.

The government said Water Resource Taxes are expected to increase considerably from $0.5 million this year to $22.6 million next year.

It said this is due to the application of the newly revised tax rates for Water Resource Taxes in 2011.