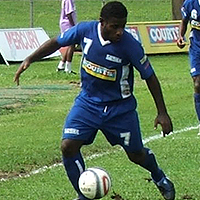 It was fireworks at Govind Park in Ba as Lautoka and Rewa ended the first match of the Champions league with a two-all draw.

Lautoka applied early pressure but Rewa defence stood tall and did not allow the Blues any chance till the first quarter.

It was Ratu Veresa Toma who opened the account for Rewa in the closing stages of the first half when he smacked the ball in the goalmouth after a lapse of concentration by the Lautoka defense.

Lautoka came back fresh in the second half and deadly striker, Valerio Nawatu hit twice to give the Blues a 2-1 lead.

The Blues maintained the lead till the 43rd minute in the second half when Rewa mid-fielder, Epeli Saukuru hammered in the equalizer much to the dismay of Lautoka fans.

Both Rewa and Lautoka now have a point each.

Meanwhile, in the second match of the Champions league, Ba beat Navua by 2-1.

Ba led 1-0 in the first half through a goal from Isimeli Naresia but Navua came strong in the second half and Joseph Mishra got the equalizer for the Southerners.

The Men In black tried hard and free kick specialist, Avinesh Waran Swamy made it 2-1 through a free-kick.