The owl is a symbol of wisdom - Blake

The owl is a symbol of wisdom - Blake 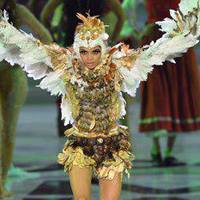 The owl is a symbol of wisdom and has a connection to Fijian history.

That is the reason why Miss Fiji Koini Vakaloloma wore an owl costume in the Miss World finale in Mongolia over the weekend according to the Miss World Fiji national director Andhy Blake.

Blake said he does not know why people are raising concern about the costume.

Blake said the organizers liked the costume so much that they asked Miss Fiji to start off the program.

Blake said he saw no problems with Miss Fiji wearing an owl costume and doing the meke.

When asked, he said it was an acceptable standard on the Miss World stage.

Questions have been raised on what is the significance of an owl to Fiji and why Miss Fiji Koini Vakaloloma wore the owl suit.

Vakaloloma led the group of girls out and performed a meke in the owl suit as part of her performance in the world pageant.

According to an earlier statement, the national costume symbolizing the owl and the special meke was overseen by Andhy Blake with the help of Pasifika Voices performers.