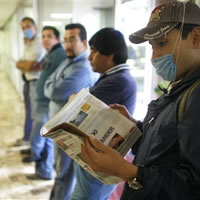 Fiji now has two confirmed cases of influenza A H1N1!

Permanent Secretary for Health Dr. Sala Saketa said the second confirmed case and his family have now been quarantined.

The first case was confirmed yesterday who is a 36 year old man.

Dr. Saketa confirmed that both patients came into contact with infected persons while in Australia.

Dr. Saketa said the first case is recovering well and they health centers are now on high alert to try and limit the spread of the virus.

The Ministry is also trying to track down anyone who may have come into contact with the infected persons over the last few days.

Meanwhile, Health Ministry Officials were onboard the cruise liner Pacific Star this morning which docked in Savusavu to screen passengers for any symptoms of the virus.

Ministry Spokesperson Iliesa Tora confirmed that none of the passengers were found to have any flu symptoms and they are allowed to disembark in the hidden paradise for a day of sightseeing.

The public is being urged to exercise extra precautions in avoiding the spread of the virus by washing your hands properly, covering you mouth when you sneeze or cough and report to medical authorities if you think you have a symptom of the virus, that is  flu like symptoms and constant sneezing.