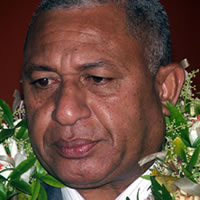 Australia and New Zealand are employing "bully-boy" tactics and in the process frustrating the efforts of the Interim Government in moving Fiji forward.

These are the comments of Interim Prime Minister Commodore Frank Bainimarama in response to their attempts to seek an amicable way forward on the standoff with the NZ Government which has so far gone in vain.

Bainimarama said Fiji recognizes and values the importance of maintaining healthy, progressive and mutually rewarding bilateral international relationships. He added only the NZ and Australian Governments have consistently frustrated the efforts of the Interim Government through imposition of arbitrary, inhumane and punitive travel bans.

Bainimarama added the two countries have also not given any heed to the recent High Court of Fiji ruling which has held that the appointment of the Interim Government by His Excellency the President is legal.

He said while preaching the rule of law to be respected and upheld, the stand taken by these two countries makes a hypocrisy of their supposed adherence to due process.

Bainimarama said these restrictions have imposed a cruel penalty on innocent family members, and it has impacted the education opportunities of innocent children.

Meanwhile New Zealand's Acting High Commissioner to Fiji Caroline McDonald has cancelled her scheduled Christmas leave as there is still no solution in sight over the diplomatic row with the interim government.

It was earlier confirmed that McDonald was scheduled to go on leave from yesterday and would have returned to Fiji by mid January.

However, the Senior Private Secretary to NZ Foreign Minister Murry McCully, James Funnel has confirmed to Fijivillage news that the Acting High Commissioner is no longer going on leave.