12 confirmed deaths due to dengue fever

12 confirmed deaths due to dengue fever 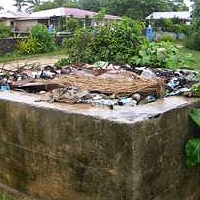 There have been 12 confirmed deaths due to dengue fever so far and one case is highly suspicious.

Dr Kama said from the past 6 weeks there are about a thousand or more cases received per week throughout the nation and the numbers could increase next week.

Over the last few weeks, the western division has recorded the highest number of cases which is 2,715.

Dr Kama said the two preventative ways is to take paracetamol and lots of water and also to destroy all breeding places of Dengue Mosquitoes.

Please see a doctor if you have dengue like symptoms.

Do not leave till it's too late.

People are being encouraged to assist in the cleanup campaign.

He said last week's cleanup campaign was a successful one where more than 1000 people took part in the nationwide clean up.