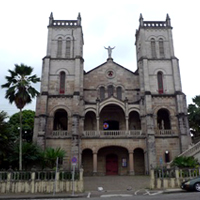 The Catholic Church of Fiji has recommended to the Constitution Commission that the new constitution should have a Covenantal Chapter.

While making the church’s submission, director of the Catholic Education Board Remesio Rogovakalali said the chapter should comprise the shared principles that all Fiji citizens agree to guide and govern the political, social, cultural and the economic life of the country.

The church recommended that the acknowledgement of God as creator of humans, human dignity, common good, diversity, social justice, equality, freedom and rule of law are to be part of the Covenantal Chapter.

The Catholic Church has also recommended that a provision should spell out the clear separation of the state and religion while recognizing that religion and civil society have a crucial monitoring function in ensuring the transparency, accountability and responsibility of government towards our people.

The Catholic Church recommended that elected political leaders and government institutions account directly to their constituencies and stakeholders by a Code of Conduct and not only to their political parties through systematic consultation and reporting.

In their submission, the Catholic Church said there should be social protection of i-Taukei land and minority groups from exploitation, while at the same time affording security of tenure and ensuring that land required to be utilized by the i-Taikei at the end of the tenure revert to the i-Taukei.

The Catholic Church also believes that the military should not play any part in political governance.

In this regard, the church reaffirmed the recommendations in the People’s Charter that the military’s role be realigned to include human security and enhance the RFMF community development partnership by strengthening its developmental role to ensure that its professional, technical and social potential is fully realized.

The Catholic Church also said that the church defends the belief that marriage is between a man and a woman, in free consent, with the knowledge that each is responsible for the other and the children that they will bring forth into this world.

In this regard, the church does not want and will not support same sex marriages and abortion.