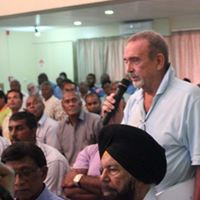 Decrees like the ones in relation to the Fiji National Provident Fund reform cannot be legally challenged according to the draft constitution however the decrees can be amended or removed altogether by the next parliament.

Questions were raised by FNPF pensioner Rick Rickman in the draft constitution consultation session in Lautoka on why the FNPF decree cannot be challenged.

Rickman said he and other pensioners entered into a contract and their pension has been cut under the reform.

Attorney General Aiyaz Sayed-Khaiyum said while the decrees can be reviewed or changed by the next parliament, people should understand that the FNPF reforms were necessary.

Sayed-Khaiyum said FNPF is not in existence to only pay pensions for the current pensioners but it is a long term fund.

Meanwhile, FNPF’s Assistant General Manager Prime Services said in Rickman’s case, this was Rickman’s personal choice after he withdrew a major portion of his refundable or initial pension amount that was allowed for all existing pensioners during the pension reform period when the pensioners were told to make their choice.

At that time, the FNPF pensioners had to decide on whether they wanted to take their initial pension amount out as lump sum or go on the pension based on the amount they decide to leave on pension.

A man and his wife who sexually exploited two young girls in Nakasi two years ago, will spend 16 years and 10 months behind bars. The man and his w... 17 minutes ago
LATEST NEWS

Fiji has recorded 66 new COVID cases since Friday. 14 new cases were recorded on Friday, 36 cases on Saturday, 10 cases on Sunday and 6 new cases ... 10 minutes ago

5000 youths are expected to benefit from the Open Skills Training that will be provided by the Commonwealth of Learning in partnership with ... 12 minutes ago