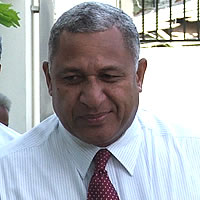 While speaking to the Vice President of the People's Republic of China Xi Jinping, Commodore Bainimarama said China has great potential as a source of foreign direct investment for Fiji and he revealed that Fiji is positively considering the Investment Protection Agreement initiated by the Chinese authorities.

Bainimarama also said the underlying principles of Fiji's relationship with China essentially are the mutual respect for each other, non interference, commitment for global peace and harmony, and Fiji's unwavering commitment for the One-China policy.

The Interim Prime Minister also informed Vice President Jinping that Fiji officials are discussing with the Chinese Ambassador in Suva the scope for further assistance, particularly in reconstruction, restoration and rehabilitation works on the damages caused by the recent floods.

He also briefed Jinping on Fiji's current situation, saying that there is much hype and misinformation about the political developments here.

Bainimarama said the military essentially assumed control of the government two years ago with clear objectives to eliminate corruption, racial discrimination policies and practices, and to bring about necessary reforms in the area of public service, governance and the electoral system.

He told the Chinese Vice President that the military did not intervene for the purpose of remaining in control and power beyond a reasonable time than what would be required to achieve the objectives.

Bainimarama then stressed that we just cannot go to elections because the international community wants Fiji to have elections.

He said Fiji will definitely return to parliamentary democracy, the timing of which will be determined by the people of Fiji.

Bainimarama also thanked the Chinese government for fully recognizing Fiji's sovereignty and adopting a policy of non-interference in its domestic affairs.
Latest Videos